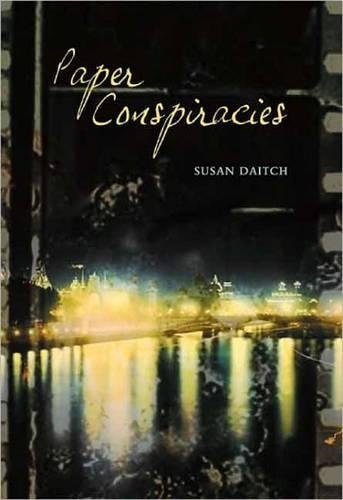 It is a rare delight to keep company with the literary product of a mind as intelligent, worldly, and erudite as Susan Daitch’s, a delight that far outweighs the work’s minor shortcomings.

Her third novel, Paper Conspiracies, views the Dreyfus Affair from the perspectives of peripheral minor players in New York in the 1990s, and Paris and one of its suburbs in the 1890s, the 1930s, and 1968. Among the issues it touches upon are authenticity and forgery, diversity and xenophobia, paranoia and mass hysteria.

In 1894 French army captain Alfred Dreyfus, whose wealthy Jewish family moved to Paris when Alsace was conquered and annexed by Germany in the Franco-Prussian War, was tried and convicted of passing military secrets to the German embassy and imprisoned on Devils Island in French Guyana.

In 1896 evidence that appeared to exonerate Captain Dreyfus surfaced and he was brought back to France for a second trial. French Army Generals and intelligence officers closed ranks to protect the real spy, another French Army officer and habitual gambler named Walter Esterhazy, and were supported by the monarchist Catholic press which reprinted the numerous forgeries military intelligence produced and introduced to frame Dreyfus, who was found guilty a second time.

The espionage allegations provoked a wave of intense antiSemitism and sharply divided the French public into opposing camps: secular democratic liberals who held an inclusive cultural view of French nationality and were convinced Dreyfus was innocent, and Catholic monarchist conservatives who held a xenophobic blood and soil view of French identity and were certain he was guilty.

Liberal opinion was expressed by novelist Emile Zola, whose 1898 open letter to the French President, “J’Accuse,” was published on the front page of a leading Parisian newspaper, and in 1899 by a 13-minute dramatized documentary film, L’Affaire Dreyfus, by cinema pioneer Georges Mèliés, the first multiscene, multireel film shot with multiple sets. “J’accuse” led to a presidential pardon of Dreyfus who seven years later was fully exonerated and reinstated into the French army. Screenings of L’Affaire Dreyfus resulted in violent riots by an enraged conservative public.

Paper Conspiracies is divided into six distinct sections of varying lengths and narrative styles whose relation to one another is not initially clear. Each section is divided into one- to three-page subchapters that are convenient for commuter reading, and are illustrated with reproductions of documents related to the Dreyfus case plus still images from Mèliés’ film.

The first person narrator of Train-Eating Sun Blinded by Eclipse, the novel’s first and longest section, and of Every Man His Own Illumination, the last and shortest section, is its most fully developed character, Frances Baum, a late 20th century Jewish American child of Holocaust survivors, one-eyed victim of a letter bomb, and silent film conservator who is assigned the job of preserving and restoring Mèliés’ Dreyfus documentary which she refers to by its English title, The Dreyfus Affair. Frances receives conflicting suggestions on how to perform this task on the one hand by her boss, and on the other hand, by cryptic messages from a recently repatriated Vietnam-era draft resistor named Jack Kews (pronounced like “J’accuse”).

Jack, who had until recently been living in exile in England, did not meet the criteria of President Ford’s limited pardon of draft resistors, and thus has reentered the United States illegally. Ms. Daitch writing in the voice of Ms. Baum seems unaware of President Carter’s subsequent blanket pardon of draft resistors which would make Mr. Kews’ 1990s repatriation completely legal.

The first section also displays some of the novel’s strongest prose, including the following paragraph:

“Stuck in traffic, I daydream. I could be anywhere, bouncing from city to city, my path traced by an animated dot on a turning globe. Driving down Sunset Boulevard, Boulevard du Montparnasse, or the Cross Island Parkway approaching the Throgs Neck Bridge, I’m traveling in an unassigned city, a city that becomes a character with arms, legs, hands, and feet of clay.

“This borough is the head, the people on this block will spill out and clog an artery, this corner was torn up and never rebuilt: the city, an amputee, erases itself from a distance, it’s a candy city, apartment towers look as if made of waffles with Life Savers water tanks perched on rooftops. I drive closer to them and the metaphor of sweets falls on its face. Barrackslike buildings near a train depot have been gutted, fire escapes and catwalks dangle from crumbling walls; ailanthus, sumac, orange hawkweed, and yarrow grow out of the wrecked foundations. An area of warehouses is transformed into expensive apartments: the city rewrites itself.”

As a character, 1990s New York City—whose inhabitants of multiple nationalities enjoy one anothers’ company, cultures, and cuisines—is presented as a stark contrast to xenophobic 1890s Paris. Historical fiction often offers allegorical commentary on present day events; whether she intended such an analogy or not, Ms. Daitch’s decision to place the New York scenes in the last decade of the 20th century instead of the present day implies a comparison between fin de siècle French antiSemitism and 21st century American Islamophobia.

The background research Frances undertakes before working on the film fills the reader in on some of the details of the Dreyfus case:

“. . . the German attaché Schwarzkoppen . . . and the Italian attaché, Pannizardi, had a mysterious informer whom they called ‘Jacques Dubois’ after the swindler who proposed to sell them ‘smokeless gunpowder.’ The swindler, Dubois, was actually Esterhazy, the real spy, also known as D or Z.

“Dubois = D, who was really Esterhazy also known as Z, not Dreyfus, at all, therefore D = Z.

As for Captain Dreyfus,

“. . . the accusations leveled at him weren’t completely the result of confusion over handwriting. The army targeted him because they believed he belonged to a rootless tribe and that nomadic nature, according to his accusers, was inherited, not learned. His allegiance to the army must therefore be unreliable. Of course he was the spy, who else?”

Frances is not only the novel’s most fully developed character she is also its most likeable, but after the 96-page first section she vanishes during the 240 pages of the middle four sections only to reappear in the eight page final section.

The Ordinary Track, the novel’s second section, has as its first person narrator a girl whose mother is the landlady of their Paris apartment building in 1968. The mother decides to shelter rent-free Auguste Bastian, the illiterate, homeless, elderly former cleaning lady who seventy-four years earlier delivered the contents of the Germany embassy’s wastepaper baskets to French intelligence via drop-off spots in nearby churches. Our juvenile narrator accompanies Auguste on her habitual walks to visit these same churches during which she recalls details of her espionage work in general and the famous spy case in particular.

In the third section, Squirting Cameras and Rubber Noses, Ms. Daitch employs an epistolary narrative style, and its letters are dated between 1934 and 1942. Most of these were written by Esterhazy’s former paramour Claire Francoeur, dated July and August 1934, and addressed to her sister Lille from the Parisian suburb Montreuil where Claire’s house is adjacent to the long abandoned premises of Mèliés’ Star Films studio.
Claire is the kind of narcissistic villain who views herself as a victim. Her letters include self-incriminating details of how she copied Esterhazy’s texts and signed them “Alfred Dreyfus,” yet she writes, “the public humiliation and shame I’ve suffered needs to be put right.”

Claire remains an unrepentant monarchist who approves of “the Reich over the border” and would like to see France’s Jews “burned in glass furnaces,” a phrase used by conservatives demagogues and mobs four decades earlier and eerily prescient of the Holocaust to come. Spending 60 pages in Claire’s company might be trying but for Ms. Daitch’s engaging prose, the historical details Claire shares, and the schadenfreude of witnessing her own account of her undoing.

The novel’s fourth section, The Section of Statistics, and its fifth, Actualities and Preconstructions, take place in late 1890s Paris and Montreuil, and both are conveyed through third person narration. The Section of Statistics was the headquarters of the French intelligence agency, and the section of the novel that bears its name describes how its archivist, Felix Gribelin, blackmails a petty criminal to produce forgeries to clear Esterhazy and condemn Dreyfus. When the man steals a camera from the corpse of a murdered transvestite photographer Felix threatens to charge him with the murder unless he produces the forgeries, and offers to drop the charges if he complies. Like most fin de siècle French Catholic conservatives Felix harbors a paranoid belief in a vast secular liberal conspiracy called the Syndicate:

“The Dreyfus trial confirmed Felix’s belief in the Syndicate, a vast network of businessmen, lawyers, shopkeepers, theater owners, actors, all kinds of people from bankers to newsboys. No one was exempt from suspicion of membership, but if a citizen crossed the street when a church came into view, that pretty much guaranteed association with the Syndicate as far as he was concerned.”

Felix instructs his blackmailed forger “to cut, paste, scratch out, recopy, and construct a series of documents that would create crushing proof . . . against a known guilty party. As far as initials were concerned, P’s had to be changed to D’s, and Z’s left out altogether.”

The Section of Statistics also introduces a few minor characters who also appear in Actualities and Preconstructions, the novel’s penultimate section in which the creation of Mèliés’ Dreyfus film and the violent reaction to it are seen from the perspective of Mèliés’ production assistant Fabien, a mild mannered apolitical bachelor, urban walker, restaurant patron, and keen observer of the Parisian scene. The section’s title refers to Mèliés’ two subgenres of films: Preconstructions were fantasies such as his 1902 film Le Voyage dans La Lune (A Trip to the Moon) that required highly imaginative sets; Actualities, such as the Dreyfus film, were dramatized reconstructions of current events, in which realism replaced the make believe of the Preconstructions.

“The point of the film was to take on the mob. That was Mèliés’s intention. Fabien . . . wondered if Mèliés realized the depth of violence crowds were capable of when the issue of the trial was raised. City streets, as he walked them, contained the potential to take on many possible characteristics, benign or animated. Paving stones uprooted and guns fired—these things didn’t reverse themselves—nor could the metamorphosis of an urban landscape be controlled just because the camera was dismantled.”

While purchasing crockery for the Devil’s Island scenes of the Dreyfus film Fabien is photographed leaving a Jewish owned store by a transvestite photographer working for the monarchist Catholic newspaper La Libre Parole, a periodical also referred to in earlier sections of the novel that “had ideas about race and infection, and somehow in their desire to rout out those they perceived as foreigners, Fabien knew he’d been caught up in a campaign of eradication that he felt certain had nothing to do with him.”

The final section, Every Man His Own Illumination, returns to Frances in 1990s New York and ties up loose ends in a way that is disappointing. This review’s brief synopsis cannot possibly convey the novel’s wealth of detail and interconnected plot elements that demand attentive reading. Readers who miss some of these during a first reading will find that Paper Conspiracies rewards rereading. Enthusiastically recommended to fans of highbrow, erudite historical fiction. Readers who enjoy the novels of Umberto Eco, for example, will probably also enjoy those of Ms. Daitch.