Before The Paparazzi: 50 Years of Extraordinary Photographs 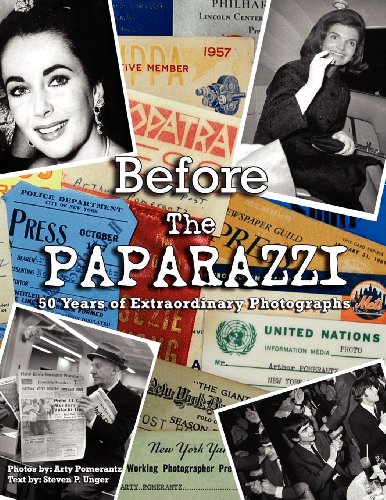 “Before the Paparazzi is the Pulitzer Prize-nominated press photographer Arty Pomerantz’s love letter to the art of press photography during a different time, in a world that no longer exists. . . . A time of growth and civil unrest. A time of celebrity and the height of organized crime. A time when pictures were not merely taken, but made.”

New York: a city of hope and, often, a crusher of dreams. Like the song says,” If you can make it here, you can make it anywhere.” Throughout the years, New York City has transcended through countless incarnations of itself, each one revealing a new layer of the limitless metropolis that never sleeps.

With each new ray of hope or heartbreaking tragedy unfolding, only one thing can halt the perpetual passage of time: photography.

Whether capturing a fleeting emotion, freezing a moment in history, or simply rendering the delicate tendril of smoke from the newly extinguished, wished-upon flame of a child’s first birthday, the photograph is a tangible witness to a moment in time that can never and will never replicate.

The history of photography is a long and interesting one, and as the technology of photography progresses, most of those wielding it have not. It seems like the paparazzi have been in the news almost as often as they’ve captured it. From the infamous camera slap-down by Sean Penn to Lady Diana’s fatal Parisian car chase, the paparazzi have become more nuisance than necessity.

Before the Paparazzi is the Pulitzer Prize-nominated press photographer Arty Pomerantz’s love letter to the art of press photography during a different time, in a world that no longer exists. A time when a press pass got you into everything from presidential inaugurations to the aftermath of a mafia hit. For more than 40 years Mr. Pomerantz photographed everything from uptown celebrities to downtown infernos, forever preserving once-in-a-lifetime moments.

Mr. Pomerantz’s first job at 14 years of age took place during World War II where he was earning 35 cents an hour developing pictures of bombing targets that were to be printed on the matchbook covers of fighter pilots; this way, every time the men lit up, they’d see the target they were supposed to blow up. At 15 years old, Mr. Pomerantz was a freelance photographer for the Bronx Times. Eventually leading to his big break around 1956, when he finally became an assignment photographer for Journal American—a career he flourished in for the next 40 years.

Before the Paparazzi exhibits a series of more than 300 images spanning the 1960s–1990s, which have been published in major newspapers. Unlike today’s conscience-challenged paparazzi for whom privacy is alien word, Mr. Pomerantz’s images hail from a time when a photograph was not meant to embarrass or exploit, but only to reveal.

A few of the standout photos include: the 1967 Newark Riots; looting during the 1977 blackout; the assassination of Mafia Boss Carmine “The Cigar” Gigante; celebrities such as Beatles and Elizabeth Taylor; and politicians from Eleanor Roosevelt to JFK and Castro. Each photograph emanates a feeling, texture or emotion and the accompanying text, elaborating on circumstances that were the impetus for the picture, infuses each image with even more meaning. Mr. Pomerantz’s style demonstrates that the perfect shot is not always flawlessly captured, but rather gets its power from the random chaos that embodies it.

Arty Pomerantz’s photographs give a voice to a New York that now lives in the minds of those who were there. Before the Paparazzi showcases these memories so that others can see the New York of yester-year. A time of growth and civil unrest. A time of celebrity and the height of organized crime. A time when pictures were not merely taken, but made.