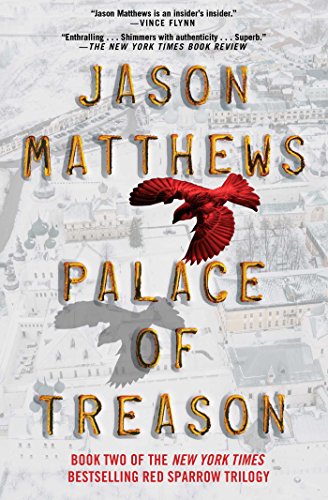 “On a scale of one to five stars, Palace of Treason is a six.”

With Palace of Treason, Jason Matthews has resurrected the spy novel from the doldrums of silly car chases, martinis shaken not stirred, and dubious tradecraft to reflect the deadly serious stakes of the new Cold War.

In this sequel to Matthews’s Edgar-winning Red Sparrow (2013), Dominika Egorova, an agent with SVR, Russia’s intelligence service, returns to Moscow to take up her duties under Alexei Ivanovich Zyuganov, chief of the Counterintelligence Depart of the Service, surely one of modern fiction’s most psychopathic, sadistic, and all around nastiest villains.

Most efficient at torture and all kinds of “wet work” in the old Soviet Union, Zyuganov directs interrogations of defendants accused on usually spurious charges fraud or tax evasion after the procurator’s office released them into his tender care. “He insists “on taking over and directing the interrogations personally, but only after having buttoned the vintage Red Army field tunic he favored while working: a brown-speckled coat, stiff and cracking with blood, reeking of pleural or vitreous or cerebrospinal fluids, all grudgingly spilled by enemies of the State.”

Unknown to Zyuganov and Russia’s president for life Putin, the “blue-eyed python,” Dominika is now a double agent for the CIA. “Returned home, she had inhaled the Russian air deeply; it was her country, Rodina, the Motherland, but the clean bite of pine forest and loamy black earth was tainted by a hint of liquid corruption, like a dead animal beneath the floorboards.”

It is this corruption, the systematic rape of her country’s resources by Putin and his cronies in order to line their own pockets with millions of rubles, that leads Dominika to become a double agent. “She was now working with CIA, spying for the Americans, she told herself, because Russia was rotten, the system was a canker. And yet, what she was doing, she was doing for Russia.”

Sent on Putin’s orders to Vienna to recruit Iran’s expert on centrifugal separation, a necessary step to producing weapons grade uranium for a nuclear bomb, Dominika blackmails the Iranian into cooperating, thanks to his affair with a Serbian woman trained in all sorts of sexual acts in Russia’s infamous Sparrow School. After her successful encounter with the Iranian, Dominika is attacked by two men. “It was the familiar, acid taste of double cross, the usual knife-across-the-throat treachery . . .” and she has no doubt Zyuganov ordered it.

As Dominika returns to Moscow, the action moves to Athens where Nate Nash, her case officer and the man she loves, is recruiting a disaffected Red Army general stationed at the Russian embassy in Greece. General Solovyow knows all about Russian weapon systems, and like Dominika, is not exchanging information for cash. “They have taken everything from me: my children, my career, my life. They ignored my worth and discounted my loyalty. Now I will take something from them.”

Dominika and General Solovyou are not the only double agents, or moles, in the novel. The CIA has its own mole: Sebastian Claude Angevine. When he is not promoted to Director of National Clandestine Service, Angevine is furious. “He felt he owned the Agency no loyalty—as if he had ever felt loyalty—and his petty spirit and mean motives set him to contemplate doing something monumental, really staggering. There would have to be a big payday too—very big.”

While General Solovyou, Code Name Lyric, is seeking revenge out of grief and a bruised ego, Angevine is more interested in money, although he likes the idea of tearing down the Agency in revenge for being passed over for promotion. Patriotism and duty to one’s country has no place in Angevine’s thoughts; his one commitment is to himself.

Nate meets Dominika in Vienna where they question the Iranian scientist. When they return for a second meeting they discover the scientist has been murdered, undoubtedly by the Iranian government, although Dominika suspects that Zyuganov is responsible for telling the Iranians as a way to scuttle her operation and disgrace her.

Nate downloads the information from the dead scientist’s laptop, then he and Dominika flee, pursued by Iranian agents. They barely escape with the information that will enable the CIA to sabotage Iran’s secret nuclear weapon program. From the exhausting chase through Vienna’s dark streets to the climax on the riverbank of the Seine in Paris, the suspense never flags, hardly giving the read a chance to breathe.

As a retired officer of the CIA’s Operations Directorate, Matthews draws on his experiences during a 33-year career in which he engaged in clandestine collection of national security intelligence and collaboration with foreign partners in counterproliferation and counterterrorism operations. In other words, Matthews knows whereof he speaks, or in this case, writes. And he writes very well.

Neither the prose nor the story will appeal to the politically correct, or any reader who lives in an alternate universe of kindness and love and human perfectibility. In the new Cold War the milk of human kindness is sour, and the language is as sharp and to the point as a rapier between the ribs.

While some fans of the genre may find Dominika as a synesthete, or one who sees auras around people that reveal their emotional state, her synesthesia contrasts with Nate’s use of verbal and physical clues to determine behavior is very effective. Her rare condition also adds to her character as an intuitive, volatile woman.

Another detour from conventional spy novels is Matthews’s inclusion of recipes mentioned in each chapter. One expects to find recipes in cozies, not gritty thrillers, but they add a cultural dimension to the novel that otherwise would require many more words, unnecessary verbiage that would slow the narrative.

On a scale of one to five stars, Palace of Treason is a six.