Palace of the Drowned 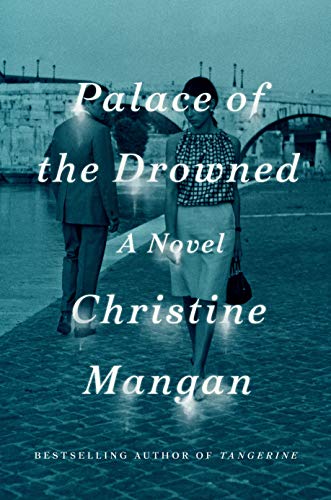 “With atmospheric writing and a literary bent, Palace of the Drowned is as much an exploration of the use of language and a study of the artistic experience, as it is a revelation of plot.”

Frankie Croy lost her brothers to World War II. Her parents also died during the war years, and though Frankie survived the bombings in England, working as an air raid warden left her traumatized.

A tragic background from which to launch her writing career.

Her debut novel took the literary world by storm, but her star has declined ever since. A scathing review of her most recent work sends her into a tailspin, though Mangan lays subtle hints down throughout Palace of the Drowned, that the review was only the final straw.

It’s through those hints that we can understand the protagonist’s breakdown—and “event” Mangan slowly reveals—is so much more than the vagaries of thin, artistic skin.

Set in 1966, Frankie’s muse appears to have abandoned her.

As she describes the anxiety of losing her publisher, she “could feel it, the thought: the end, lurking just around the corner.”

Mangan’s careful study of the incredible toll an artistic life can take, mingles with the challenge of being mentally unwell.

Frankie’s “event” was a very ugly, very public scene, which was also covered by the press and prompted the interest of the police. She soon realized that her life was about to take an uncomfortable twist.

“So, instead of waiting for the men in white coats to come knocking, Frankie had turned herself in, as it were.”

While at the clinic, “she experienced a new type of isolation, and the totality of it terrified her.” Enough to send her creeping out of Brimley House in the middle of the night. From the safety of a hotel, she calls her best friend to explain to that she needs to get out of England to save herself.

The longtime friend offers up her family’s mostly vacant, enormous, palazzo in Venice so that Frankie can try to put herself back together and find her way through her next novel.

And that’s where the story really begins. Frankie, unsettled and facing career suicide, finds herself in a dark and isolated place.

“The palace was enormous in scale, with a ground floor that featured an open-air courtyard with terra-cotta tiles and two staircases.” Frankie is alone in this monstrous building, save for a mysterious housekeeper, “whose near-constant scowl felt somehow appropriate given the atmosphere.”

Likely not the best situation for a woman with a rich imagination to stay. “Even the name of the palazzo itself seemed to portend something dark and ominous.”

Palace of the Drowned.

The dark and dreary palazzo, along with a gray and rainy Venice, are the backdrop to Frankie’s attempt to reinvent herself, to regain her place in the literary world—or at least keep her editor interested.

Instead, she meets a strange and disturbing young woman named Gilly, who lies about a connection between them and begins to worm her way into Frankie’s affections. Gilly’s agenda is unclear to protagonist and reader alike, is she truly a longtime fan or is something more sinister taking place?

With atmospheric writing and a literary bent, Palace of the Drowned is as much an exploration of the use of language and a study of the artistic experience, as it is a revelation of plot. Events do link, one to the next, but the way in which Mangan puts words together is as important as the story arc.

She plays with time, showing events out of order, though the story is linear. We put the pieces together of Frankie’s downfall in the same way we put clues together about mysterious figures in the empty neighboring flat and Gilly’s underlying motives.

Despite Frankie’s erratic behavior and poor choices, she’s a sympathetic protagonist. Facing the loss of the only thing she’s ever felt suited for, Frankie’s fall from grace is made worse by the public nature of the event and the continued, and growing, critical failure of each successive novel.

A writer’s career lies primarily in the hands of readers. The sway from a well-placed review can push their cherished work toward success or failure. A novelist is only as good as their most recent book, striking fear when that work doesn’t hit the same high marks as the one before.

On the heels of her own highly successful first novel, Mangan’s own anxiety about her career path might have helped inform her character’s story, but with another rich and suspenseful story under her belt, we can anticipate a very different outcome.