Painting Heaven: Polishing the Mirror of the Heart 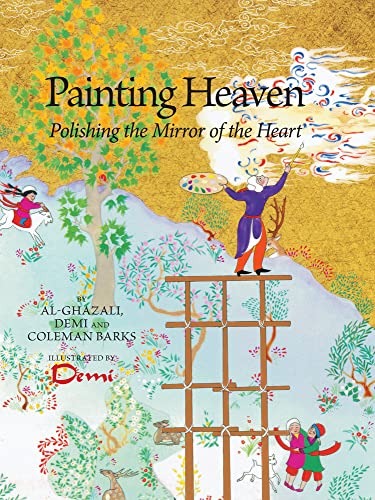 With its golden cover flecked with small figures of painters and children dressed in rich hues of scarlet, emerald, and violet, the book beckons readers to a numinous landscape. Based on a story in the renowned Muslim philosopher al-Ghazali’s The Revival of the Religious Sciences, this children’s book invites young and old to ponder the multifaceted nature of reality, spirituality, and beauty.

The seemingly whimsical plot springs from the visit of a Chinese painter to the King of Persia. Dressed in white and black, the foreigner makes the strange assertion that, unlike other artists, he can make heavenly paintings that “contain all the colors of the rainbow, and also no colors at all; they contain all the clouds in the sky, the sun and the moon, the planets and stars and everything on earth; but they also contain Nothing at all but the shining Light of Heaven!”

Intrigued by this extraordinary claim, the king proposes a contest. The Chinese artist will compete with five of the Byzantine kingdom’s best painters, and in six months they will all submit their work to be judged.

The ensuing contrast between the king’s chosen artists and the Chinese painter unfolds with humor and a sense of wonder. The Byzantine painters pile on the rainbow colors, images of the sun and moon, children and animals, and “everything on earth in perfect detail.” The Chinese man, however, asks for no colors and no brushes. Instead, he requests just polishing tools and cleaning rags and every morning disappears behind a curtain to work all day. The perplexed king assumes the man must be crazy.

At the end of six months, the king encounters the expected—bright, gorgeous paintings by his kingdom’s artists—but also the unexpected splendor of the visitor’s work. Sharing the king’s surprise, readers will likely gasp as they view the Chinese man’s polished, sparkling work of art. Here, Demi delights her audience by showing the blissful visitor on a shimmering silver page reflecting the brilliant colors of the book’s opposing image.

Perhaps some will disagree with the king’s judgment, but Painting Heaven provides a singular opportunity for readers to glimpse the ancient wisdom of an Islamic philosopher who has urged humans to “polish their hearts” so they can appreciate both the visible and the invisible world.

Older readers, theologians, and educators will appreciate the book’s inclusion of the translated story by al-Ghazali, a poem by Coleman Barks inspired by the tale, and passages from The Marvels of the Heart, Book XXI of The Revival of the Religious Sciences.