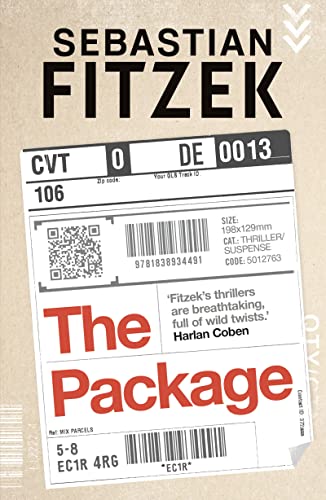 Emma, a distinguished psychiatrist speaking at a conference in her hometown of Berlin, treats herself to an overnight stay at the posh conference hotel. She steps out of the shower. Written on the steamed–up bathroom mirror is a message: GET OUT. BEFORE IT’S TOO LATE.

Emma screams, throws on a robe. Frantically she searches the suite, the closets, behind the leather chairs. Nothing. Everything seems fine. And then a knock at the door. A woman, over-dressed and over-perfumed, having heard a shout, asks if she is okay. A call girl, Emma thinks, on the way to a client on this floor who must be flush with cash. She’s fine, Emma assures the hooker, feeling somewhat foolish as she closes the door at having made such a ruckus.

And then a hand grabs her, pins her down. A sickening smell of rubber. She is raped and wakes up at a bus stop near the hotel, her hair shorn in the signature manner of the serial killer known as “The Hairdresser.” The police aren’t convinced by Emma’s story. Nor is her husband Philip, a criminal profiler whose analyses had put “some of the most dangerous criminals Germany had ever known behind bars.” Philp does his own investigation and can find nothing to support Emma’s version of events.

The oddest incongruity: the reception desk of Le Zen hotel had called Emma’s cellphone the night of the attack to ask if she would still be checking in.

“We don’t have a room with that number.  ‘4’ is an unlucky number in the Far East,” the reception clerk explains. “The number ‘4’ is similar to the word ‘death’ in everyday Chinese, Japanese, and Korean.”

Author Sebastian Fitzek, whose books sell in the millions, is one of Germany’s most widely translated and successful authors of psychological thrillers. Jamie Bulloch’s English translation is taut and moves the action along with harrowing speed.

Who is Emma? Prior to the attack she is a scrupulous physician who fights to “improve the legal status of patients undergoing psychiatric treatment.” She repeats the infamous and surreptitious “Rosenhan experiment” whereby fake patients are sent to psychiatric institutions to see what happens “when sane people are admitted to closed establishments.” She shows the conference audience a woman undergoing involuntary shock treatments despite having insisted on admission that she never wanted such treatments.

“Even in the 21st century people risked becoming the playthings of demigods in white,” she admonishes. And then Emma reveals that she herself was the subject in the video. Yet in reality she only says so to shut up a heckling critic. She is a pathological liar, ironically recognized as a psychiatric expert in mythomania and pseudologia fantastica, the study of pathological lying.

After the attack we see an individual who is high-strung, vigilant, and easily hysterical. Emma and Phillip live in a gated community where “everybody knew everybody else by name and what they were up to.” Even the daily delivery man, Salim, has become used to bringing the “many things she needed delivered to her door.” He typically brings the dog, Samson, a treat, and chats with Emma about the world outside of Emma’s gates as she holes herself up for months, terrified to venture out.

And then, Salim asks her to take a package addressed to a neighbor, A. Palandt, a name nobody recognized. With trepidation, she lets it into the house.

The words in the mirror had “awakened an old trauma” of her father roughly ejecting her from her parents’ bedroom with a warning never to barge in again. “Get out or I’ll hurt you,” he had said. Her parents argued frequently, violently. Blessed with a healthy imagination, Emma invented an imaginary companion, Arthur.

Now she sees herself sinking into paranoia, the Greek word meaning “contrary to all reason.” A rape in a hotel room that didn’t officially exist and which she had searched thoroughly before the alleged attack? She was no longer sure. Yet “how many patients had she treated with a completely distorted sense of reality . . . who did nothing all day long apart from mentally twisting their observations and experiences?”

Emma’s daily work now consisted of “trawling the internet for the latest reports about the Hairdresser” despite Phillip expressly forbidding it. Perception becomes distorted, her vision narrowing and graying out. Objects seem to move by themselves in unusual ways. Is her perception merely unreliable, or is she going insane?

The neighbor’s barrel with the severed limbs. And the deliveryman, Salim, watching her.

She cuts Philkips throat. . . . One mishap after another as she tries to control the situation. Bumbling. Only calling attention to herself. All this happened “just because of a package for the neighbor.”

She tries with the help of her friend, a defense attorney, to unravel the identity of the Hairdresser. Only to be swamped with false leads.

In the end her treating psychiatrist or orders "a full-scale replica of Conrad's office to be built in the clinic small gym," where he uses Emma's own delusions to tour her. She refused any visit on her ward and "was a person who opened up to very few people, enter nobody more than her paternal friend," Conrad. It's the only way for her to tell the truth about what really happened in the hotel room.

Eventually, a breakthrough: "As time goes by I am less and less sure that I was in that hotel," says Emma. Ever since childhood Emma has had a powerful imagination

It seems she is making progress, the reader feels were getting close to the truth, and then a surprise twist about who is actually being observed in this facsimile office.

The twist is implausible, but if one accepts its premise then it serves the story well. The actual murderer is even creepier than the Hairdresser. He even weaves Emma’s hair into the enso rug.