The Ox: The Authorized Biography of The Who's John Entwistle 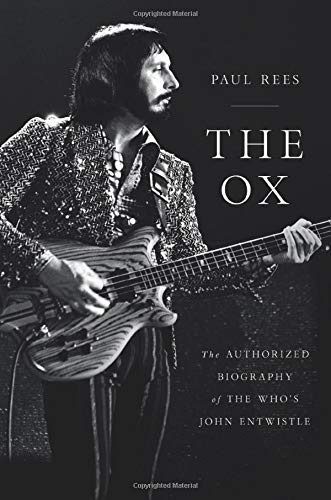 The Russian novelist Leo Tolstoy wrote famously in the first sentence of Anna Karenina: “All happy families are alike; each unhappy family is unhappy in its own way.”

Had Tolstoy lived until the 1960s and observed the frantic era of sex, drugs, and rock ’n’ roll he might had changed his tune and exclaimed that “all happy bands are alike; each unhappy band is unhappy in it’s own way.”

The members of the big English rock bands of the sixties—The Beatles, the Stones, The Kinks, and The Who—were often poor but happy at the start of their magical musical journeys and often wealthy and unhappy at the end of their journeys.

That’s the case with John Entwistle, the bass guitarist for The Who, the band that at its height included Roger Daltrey, Pete Townshend, and Keith Moon, and that recorded hits such as “My Generation,” “The Kids are Alright,” “Won’t Get Fooled Again” and “Pictures of Lily.”

The Who also performed, and became famous for, Tommy, the rock opera about a blind, dumb, deaf boy who plays a mean pinball.

Entwistle was an integral member of the band, though he was never as famous as Daltrey and Townshend, who have both been memorialized in dozens of interviews, articles and books such as Dear Boy, Who I Am and Thanks A lot, Mr. Kibblewhite.

Now, finally Entwistle gets his own book.

What’s appealing about The Ox is that The Who’s bassist wasn’t a truly great rock star. By focusing on Entwistle, who was nicknamed “The Ox”—because he was stolid—and who was also known as “The Quiet One,” Rees is able to tell the story of The Who from the side, as it were. He look at Daltrey and Townshend from a slant, and yet without distorting the picture, including the drugs, affairs, womanizing, marriages, divorces, and the addiction to spending money and buying stuff, including expensive cars and “stately homes,” as the Brits call them.

In The Ox, Rees, a veteran rock reporter and journalist, makes ample use of a manuscript that Entwistle began, but never finished in which he meant to tell the inside story of his rise from anonymity to notoriety.

Of The Who, Entwistle wrote candidly, “We were arrogant, anarchistic arseholes and we loved it! We didn’t give a shit about anything else other than playing our music to as many people as possible. We changed the face of rock and everybody else took the credit.” He added, “Now, I’m taking it back.”

Entwistle’s language is refreshing. So is his point of view, including his sense that The Who were upstaged by other bands. Too bad he never had the chance to complete his narrative and demonstrate how The Who changed the face of rock, if indeed they did.

Rees shows that Entwistle lived regally. He also writes about him as though he were royalty; not a king, but a duke or a prince. He takes readers behind the scenes and backstage at the Monterey Pop Festival and Woodstock and shows what The Who were like when they weren’t performing before an audience.

According to Rees, Entwistle had a “pathological aversion to conflict” and couldn’t face his own father when he broke up with his first wife. He left it to her to make the phone call and tell Dad the sad, bad news.

Entwistle eventually formed his own band, and reinvented himself in L.A. for a time, but for the most part his creative life came to an end when The Who broke up for the first time (there were reunions) and when he left England, which had shaped him and his personality.

Like so many other biographies of famous musicians, The Ox offers a cautionary tale about a man who began songs and couldn‘t finish them, much as he started his autobiography and never got to the end. “I woke up here this morning, ’n’ I don’t know where I am,” Entwistle wrote in one unfinished song. “This room’s still spinnin’ out of time with the world.”

The Ox follows Entwistle’s spinning and shows where he was throughout his career even though he himself didn’t always know.

Also, like many biographies of famous musicians, this one sends readers back to The Who’s hits: “My Generation,” “The Kids are Alright” and “Pictures of Lily,” a sad song about a long dead woman whose image helps a young man get through the darkest of nights. No pictures could do that for Entwistle, at least not for long.