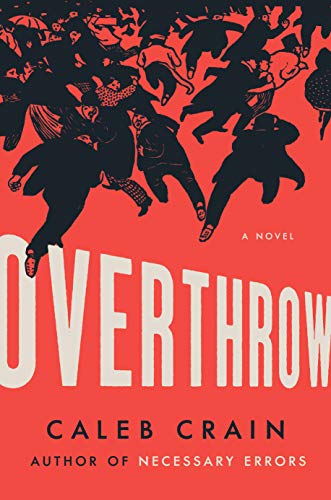 Reading Caleb Crain’s fascinating, occasionally infuriating novel, Overthrow, leads one to ask ponder the function of a novel. For many readers of popular fiction, the pleasures of reading fiction are those of sharing a story: clear narrative, graspable characters, suspense. Those novels are called “page turners” because the work impels the reader to move forward to the end—the inevitable resolution of character and conflict.

While it contains elements of popular fiction, the pleasures of Overthrow are those of reading novels of the 18th and 19th centuries, of stopping along the way to savor the plethora of fascinating complex figures of speech the prose stylist scatters along the path.

There is depth in Overthrow, but Crain’s elegant style keeps bringing us back to its surface—to the beautiful arrangement of words. Overthrow demands attentive, leisurely reading, not the quick turning of pages. There are allusions to Henry James’ work in the novel, and much of Overthrow can be read as a contemporary homage to that master of psychological insight and prose style.

Matthew, a doctoral student who seems unable to complete his dissertation on 16th century English poetry, meets Leif, an attractive young man who has a job in a café. At first this seems like a pickup, which is what Matthew hopes for, but Leif instead leads Matthew to the home of his friend Elspeth and a pack of Tarot cards. Leif, Elspeth, and their friends are the members of the Working Group for the Refinement of Feelings. They believe that some people possess telepathic powers that allow them access to the innermost feelings of others. They want to use the Tarot cards to test Matthew’s powers of extra-sensory perception.

They also want to politicize Matthew. Leif and his friends also are active participants in the anti-capitalist Occupy Movement. Matthew joins them at the demonstration more to get close to Leif than out of political conviction. Members of Leif’s group want to use his telepathic powers to hack into government databases. Leif does so successfully but walks into a cyber-trap that has been carefully laid by a ruthless government contractor and is arrested.

The novel charts the evolving relationship of Matthew and Leif as it develops the conflict between the young idealists and the agents of government control. In doing so, the narrative highlights the contrast between the heightened empathy that Leif espouses and the cynical amassing of data as a means of control that their nemesis promotes.

Chapters move back and forth from different “centers of consciousness,” to use a term from Henry James: Matthew; Elspeth, an aspiring writer; Raleigh, a computer programmer who wants to use Leif’s gifts for political purposes; Chris, a disciple of Leif and Elspeth; and Julia, an older, wealthy woman who joins the group. Hypersensitive Leif is always seen through the eyes of these people. He is the group’s and the novel’s axis.

Plotting is not Crain’s strong suit. One has the sense that the stuff of popular fiction—the elements of science fiction and political thriller—are more in the background and a bit murky as well. Characters and relationships are what interest the author. There are certainly more thrilling novels than Overthrow. Crain’s gift is in analyzing intense human relationships. The book is strongest when the focus is on Matthew and Leif and weakest in details of plot.

Not everyone will be enthralled by Crain’s ornate style. It takes a lover of great literature of the past, one who appreciates the music of great writing, to appreciate his figurative language. Overthrow is a book one has to linger over, not speed through.