The Overnight Guest: A Novel 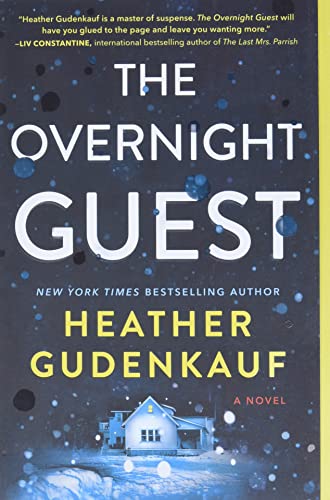 “a story ‘ripped from the headlines,’ more times than we wish to admit.”

Wylie Lark is a true crime author. She’s come to Burden, Iowa, to finish her latest book, while staying in the house where the crime happened. Wylie doesn’t know it, but in a few hours, she’ll have a very different ending for her manuscript.

“She was working on her fourth true crime book and often traveled for research, but she had never been gone from home for so long. The longer Wylie stayed in Burden, she realized there was more to it, or she would have finished the book by now and been back home.”

In August 2001, William Doyle, his wife, and their son are murdered by persons unknown. Their daughter, 12-year-old Josie, survived by hiding in a cornfield, but her best friend Becky, who’d come to stay overnight, disappeared, as did the killer. The case was never solved, and Becky was never found.

“’Get up, get up,’ Josie begged, pulling on Becky’s arm. ‘Please.’ Once again, she dared to look behind her. A shard pf moonlight briefly revealed a shape stepping out from behind the barn. In horror, Josie watched as the figure raised his hands and took aim. She dropped Becky’s arm, turned and ran.”

In a house not far from Wylie’s, a woman is held captive, along with the daughter sired by her abductor. During a blizzard, the woman sees a chance for escape and takes it. Stealing a truck, she and her daughter make a desperate bid for freedom, only to go off the road into a ditch. They are found by Wylie.

“Dark was the most unsettling time of day. If her father was in a bad mood or her mother sad, there was nowhere for her to go. She had to listen to the angry words, the tears, and the sharp slaps and punches. In these times, she would go to her favorite spot beneath the window and look at books in the fading light peeking through the gap between the shade and pane of glass. The blackest dark came in the middle of the night. It was warm and velvety and sounded like her mother’s breathing right next to

her. It isn’t the dark you should be afraid of, the girl thought, it’s the monsters who step out into the light that you need to fear.”

Wylie doesn’t know it but she’s about to learn what happened after Josie hid in the cornfield, as she and the woman face a killer.

This is a very tense tale, set against a frozen, wind-blown Iowa blizzard, a definitely deadly backdrop, as anyone living on the Great Plains will confirm. Told from three points of view—that of Wylie, 12-year-old Josie, and the unnamed child of the escaping woman—it explores the fear of someone being hunted by a killer and the hopelessness of being held captive, as well as the survivor’s guilt suffered in the crime’s aftermath.

Through most of the book, the escaping woman’s identity isn’t given, but it won’t take the astute reader long to determine who she is. Guessing the actual killer may take a bit longer when the initial suspect is discovered to have been murdered, as well.

While the story neatly ties up most storylines, there are several that are unsatisfactorily avoided.

One deals with the disappearance of Roscoe, the Doyle’s dog—unless the reader is to infer that the “geriatric coonhound mix” Wylie discovers at the Doyle house is Roscoe finally come home. This isn’t a very important point, except for the dog-lovers among the reading audience.

The motive for the crime is never clearly determined. Several possible reasons are mentioned during the narrative, but the actual rationale is never given; the killer admits he did it, and that’s it. He never says why.

Lastly, there’s Jackson Henley, the man believed to be the murderer. Henley is never actually arrested, but nevertheless is tried and found guilty by his neighbors and ostracized. In the end, he is dismissed by Wylie with a couple of sentences.

“‘I tried to explain, but don’t worry about him right now. He’s fine,’ Wylie said.”

And Henley is sent on his way. It is never explained what she said to him, nor his reaction. Is the reader to assume he simply shrugged away all those years of accusation and forgot them?

The Overnight Guest is a book best in one sitting, if possible, not more than two, if necessary, preferably on a cold, winter night with the wind howling outside for suitable ambience.

The fact that this novel could in actuality be a true crime novel is chilling. As the television show says, it’s a story “ripped from the headlines,” more times than we wish to admit. At its finish, the reader will be thankful this particular one is a fiction . . . or is it?