Over My Dead Body: A Novel (William Warwick Novels) 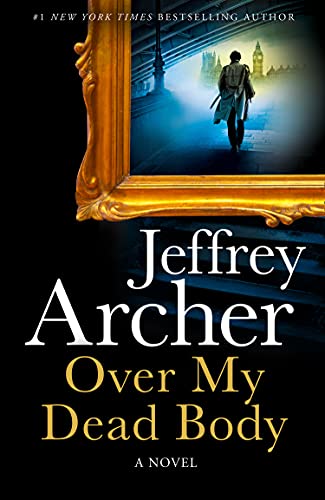 “Archer proves once again that he is a creative storyteller who moves his tale without distractions or asides that create diversions. He achieves his goal, and his readers will once again be satisfied.”

Fans of Jeffrey Archer’s work can count his newest book, Over My Dead Body, as another page turner.

Detective Chief Inspector William Warwick journeys through a maze of twists and turns, missteps and red herrings, and clues that may be sending him in the wrong direction, as he chases Captain Ralph Neville, aka Miles Faulkner, across Europe.

But let’s not get ahead of ourselves. The story starts with Warwick and his wife, Beth, on a well-earned cruise from London to New York. A cruise provided by Christina Faulkner, wife—widow of the aforementioned Miles Faulkner. Christina is an acquaintance of Beth’s, though not a close friend, and the cruise is a welcome gift although not without the first curious twist to the story.

Christina is preparing to marry Captain Neville, who is, in reality, her husband Miles Faulkner. His purported death was a sham; a way for him to escape from prison and return to his criminal ways. Christina can’t have Beth and William at the wedding, should Miles’ deception be discovered, ergo the cruise gift.

While on the cruise, the death of the owner of the cruise line occurs, and it does not take long for William to realize it was murder, not an accident. He quickly identifies the culprit and while doing so he becomes suspicious of the real reason for the gift cruise and is certain that Neville is really Faulkner; he returns to London.

Here Archer begins to lay out the various paths in his maze when, upon William’s return, he is immediately assigned a series of projects by Commander Hawksby (the Hawk), to foil several criminal organizations. The assignments are not related to the hunt for Faulkner . . . or are they? Second in command to William is DI Ross Hogan, a brilliant strategist with some unorthodox behaviors.

But William’s primary focus is on uncovering the real identity of Ralph Neville as Miles Faulkner. It is at this point that Archer displays his brilliance at twisting fact into fiction and vice versa. The projects given to William’s team seem not to be connected, but as Archer moves the story along it becomes apparent that a slim thread woven through each situation and gently pulled, brings each of these circumstances closer and closer together.

Faulkner’s downfall is his obsession with priceless art, and in this situation, he is fixated on a Caravaggio painting, Fishers of Men. As the team faces their own assignments and challenges, William and Ross are in hot pursuit of Faulkner, and the thread continues to tighten.

When William and Ross discover Neville’s true identity, Neville orders the killing of Ross’s new wife, and Ross, in his grief, takes time off from his work. Now here is where Archer really tugs the thread tight; when everyone thinks this is grief leave, it soon becomes apparent that Ross has named himself as revenge master, and the different criminals are discovered to be not so different.

A side note about Archer’s characters—he is very skilled at developing strong characters on both sides of the law. Both William and Ross are three-dimensional protagonist and second major character (respectively) who carry the story through the requisite climax scene to a successful ending.

But on the other side, Miles Faulkner and his loyalists, cunning lawyer Booth Watson who is paid a princely sum to keep his client out of harm’s way, and Bruce Lamont, ex-superintendent and dirty cop turned criminal, throw enough barriers in the path of success for the good guys, to bring tension and conflict to a new high. The secondary characters are, as expected, less developed, but still present their own strengths as they weave their way through the story.

Archer proves once again that he is a creative storyteller who moves his tale without distractions or asides that create diversions. He achieves his goal, and his readers will once again be satisfied.