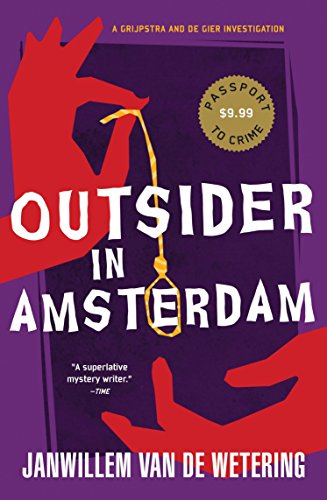 The story’s opening scene is Amsterdam in the mid-1970s. A corpse dangles from a noose in his top-floor room of an impressive 17th century building, home to the cult-like “Hindist Society.” The corpse sways in the draft, a small man in expensive khakis, a freshly laundered shirt, and not a hair out of place on his head or in his moustache. The dead man is Piet Verboom, leader of the Hindist Society.

But something is strange: a conspicuous bruise on Verboom’s face. Was he murdered and made to look like he hanged himself? And where is the huge stash of money people knew he had in his room?

In fact, most of those around Verboom probably wanted him dead. His elderly mother is quite insane, and he keeps her practically imprisoned and in a haze of meds. There are also the young drug-addled hippies, who come to the Society to work and live and are exploited by Verboom as he pockets the Society’s proceeds without believing in its principles. He’s even gotten one of the young women pregnant. Verboom’s wife Constanze has understandably left him and moved to Paris—and there’s no accounting for her whereabouts on the day of her husband’s death.

Then there is the mysterious van Meteren, a dark-skinned Papuan from New Guinea, his name probably passed down from a Dutch ancestor. Van Meteren lives at the Society, but for no apparent reason, since he is not a member. He works as an Amsterdam traffic officer, although in his home country he was a full-fledged and quite capable police officer. Thus, de Gier and Gijpstra feel a fellowship with this unusual character.

Various others also might have had a motive to murder Verboom, such as a shady accountant who hid Verboom’s financial indescretions; and a very civilized interior designer, who is actually one of Amsterdam’s drug kingpins.

Whoever may have murdered Verboom, if anyone has, no one seems especially concerned about his death. No one, that is, except a few Amsterdam cops: de Gier and Gijpstra as well as their superiors, the police commissioner, and the old commisaris. The portly, wise Gijpstra longs to be out solving crimes to escape his dull, conventional life and nondescript wife. The handsome Zen-inspired de Gier might meditate to help solve a case; and he exudes a distinct seventies vibe with his bush of curly hair, his moustache, and his denim suit. (However, fans who long ago unreservedly loved this duo might be surprised today by the sexism shown in some of de Gier's statements and actions.)

These two unconventional detectives even sit down to play music together to relax and reflect on the facts of a case—Gijpstra on drums (kept in his office) and de Gier on flute (kept in his jacket pocket).

One element that makes the story particularly engaging is the way de Gier, Gijpstra, and their two superiors approach all the facts of the case, each sure that if he considers them in the right way, the solution will become obvious. The old commisaris might ponder as he soaks his aching body in a bathtub. De Gier might look into his dreams for guidance, yet he also looks for a new perspective on the facts by having an affair with Constanze Verboom. Gijpstra might review the facts as he fishes off an Amsterdam bridge.

A distraction in Outsider might be the dialogue. It’s stilted and sounds like the characters speak English with a Dutch accent. They speak with few contractions, and the archaic “for” is often used instead of “because.” Some exchanges seem downright unnecessary, as when the detectives debate who should ring the bell at the Hindist Society, and Gijpstra says it should be de Gier because he has “a nice index finger.”

Yet a longer exchange hints that the author might have been going for an absurdist effect. On a Saturday, de Gier runs out to find Gijpstra, whom he discovers fishing. They’ve both figured out who the killer is. They have an exchange worthy of Samuel Beckett characters as they engage in a comical discussion about which of them has the paper with the suspect’s address.

Soho Crime has reissued Outsider in Amsterdam as one of 25 “classic” mysteries to celebrate the imprint’s 25th anniversary. The book certainly lives up to that “classic” billing and should definitely be read (or reread) for its unforgettable characters, unexpected plot twists, dry humor, and presentation of the facts in a way that lets the reader sift through them along with the detectives.

As long-time fans know, Outsider in Amsterdam, like other van de Wetering mysteries, is not a book to read for excitement, violence, or catharsis. It’s a “soft-boiled” mystery to engage one’s brain and evoke the easy-going and permissive attitude of 1970s Amsterdam and of its two famous fictional cops, who are amazingly chilled-out and who treat everyone, including suspects and criminals, with respect and decency.