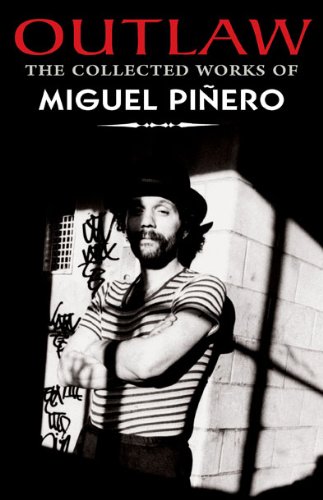 Outlaw is an apt title for this definitive collection of the works of Miguel Piñero. He was an artist who scaled the heights of literary acclaim, as well as plumbing the depths that life has on offer. Screenwriter, playwright, poet, and actor, Piñero won critical praise for his work while experiencing first hand the gritty reality of drug addiction, petty crime, and prison culture:

One of five children brought up by a single mother on New York’s Lower East Side, Piñero spent much of his life in trouble with the law for stealing and drug related offences. A recidivist criminal and drug addict, he also won literary awards, acted and wrote screenplays for “Miami Vice,” and founded the Nuyorican Poet’s Cafe.

That he won his most prestigious award for the play Short Eyes while languishing in a prison cell is the clearest illustration of the unconventional life of Miguel Piñero: a fact mentioned in Nicholás Kanellos’ very good introduction:

“How incongruous was it that he had left his prison cell to garner one of the United States top awards for playwriting, the 1973–74 New York Drama Critics’ Award for Best American Play and to win one of the most elite fellowships for artists, the Guggenheim? The “Best American Play” award to a Puerto Rican writing from within a SingSing cell?”

Outlaw contains the poems of his one published collection, La Bodega Sold Dreams (1985); some unpublished poems from the same cycle; other previously unpublished poems; and ten plays including Short Eyes (1975), The Sun Always Shines for the Cool (1984), and Eulogy for a Small Time Thief (1984). There are rumored to be many other works that never survived Piñero’s turbulent, transient life. Those that remain, and are published here, demonstrate a great talent.

Piñero’s work reflects the life of the poor and the dispossessed, those that exist on the margins: immigrants, blacks, Hispanics, junkies, and sex workers. These are the grist for his artistic mill. Because he was one of them he was able to write from the inside out. Piñero was no bleeding-heart intellectual, he was a poor thieving junkie of variable sexuality who had an enormous gift for literature. His subject was himself, his environment, his associates.

The mean streets of the Lower East Side are the setting for Piñero’s stand against the hypocrisy of modern conventional society. His are the addled and the abused and the addicted. His are the blacks and the Hispanics. He roundly attacks capitalism, imperialism, and the pursuit of the American dream. His poetry and plays lay the blame for the marginalization of large sections of his community squarely on the shoulders of conformist society:

Outlaw is a strident call to arms for all the dispossessed. It is a wake up call to the powerful and the greedy. It is a glance behind the shiny facade. It shows a world where Piñero felt at home. It is a celebration of the honesty, integrity, and bravery of the cosmopolitan denizens of the Lower East Side and beyond.

Miguel Piñero was a man of great talent who loved his people and his community. He died in 1988 of cirrhosis, and his ashes were scattered over his beloved Lower East Side, as he requested:

I don’t wanna be buried in Puerto Rico
I don’t wanna rest in long island cemetery
I wanna be near the stabbing shooting
gambling fighting & unnatural dying
& new birth crying
so please when I die . . .
don’t take me far away
keep me near by
take my ashes and scatter them throughout
the Lower East Side . . .
(from “A Lower East Side Poem”)