Our Women on the Ground: Essays by Arab Women Reporting from the Arab World 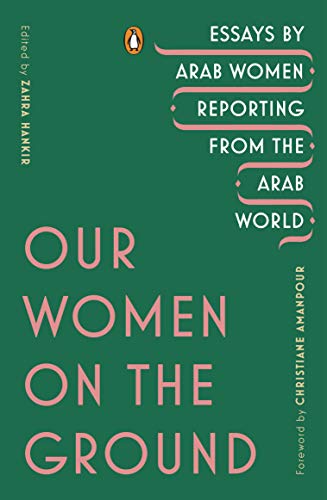 “Lebanese-British journalist Zahra Hankir has gifted us with these women’s experiences and their voices.”

“To be a journalist is to bear witness, the rest is no more than ornamentation.”
—Roger Cohen, New York Times foreign correspondent

This first of its kind essay collection in which 19 Arab and Middle Eastern women journalists, reporters, and photographers share their experiences couldn’t be more timely or important. With Islamophobia rising and conflicts in the Middle East growing, women’s reportorial voices, missing until now, are more vital than ever, as are the voices of Arabs who live and work in the region and who understand the cultures about which they write as no outsider could.

United by their feminism, journalistic skills, and their extraordinary courage, the intrepid contributors to this collection join the sisterhood of women war reporters like Martha Gellhorn, Marie Colvin, and others. They take risks, dodge bullets, and crawl around ruins to reveal what has happened in horrific conflicts in places like Syria and Yemen, and they put a human face on all of it. Many of the faces are female, even though they may be veiled or covered by burkas.

There is Nour Malas, a Syrian American journalist, setting the scene as she watches refugees fleeing from violence in Syria. “Women in loose robes dragged toddlers, babies propped on their hips. Men carrying parents and grandparents on their shoulders stepped ahead, calling back for assurances as women collapsed in the heat. Flimsy plastic bags, crammed with clothes and other belongings, dangled off shoulders and wrists. . . . the scene at the Syrian-Iraqi border seemed almost biblical.”

Rejecting the male-driven rule of journalism that one must maintain distance from their subject, Palestinian journalist Asma Al-Ghoul recalls being in her hometown of Rafah in Gaza after an Israeli attack in 2014. Donning a bullet-proof vest and helmet, she enters the conflict zone and makes her way to the hospital. There she recognizes a dead baby and then enters a room “where a distraught, hysterical mother was wailing. She asked if I had come across a baby dressed in pink. . . . She didn’t know he was dead and everyone was hiding the tragedy from her. She held me as if she knew I wouldn’t lie to her, begging me to tell her the truth. . . . When I told her that her child was among the dead, the woman collapsed, and so, too, did my role as a journalist. . . . I acted as a mother.”

Tere is Hind Hassan, a Vice News correspondent who lives in London, sharing her feelings after spending a night safely in the home of a family in ISIS country. “Meeting the family and many others was humbling. My strict upbringing, identity crisis, and experiences with racism had made me feel like a victim. But here, my privilege was striking, and the sense of shame I felt was overwhelming. These were proud people—abundant in generosity. I couldn’t shake the feeling of immense guilt that it was down to pure luck that I lived in England, and that these families had lived under the control of a death cult.”

It is reflections and remembrances like these that give this collection its power as they reveal strength and courage not only among the contributors but inherent in so many of the people they encounter as they seek to reveal the horrors of war, and the hopes that still prevail despite Middle East conflicts.

These are daring, personal, and heartfelt tales of troubling times well told. They shatter stereotypes and offer a necessary view on a part of the world too frequently misunderstood, while revealing the sexism and harassment that women journalists encounter while doing their difficult work. They help us understand why women continue to do this dangerous work, perhaps best expressed by photographer Amira Al-Sharif. “Whenever I think of giving up, I remember I cannot because many girls are relying on me to show the world what fighting spirits they are.”

Lebanese-British journalist Zahra Hankir has gifted us with these women’s experiences and their voices. For that women, journalists, editors, and newsrooms can be grateful.