Our Tortured Souls: The 29th Infantry Division in the Rhineland, November–December 1944 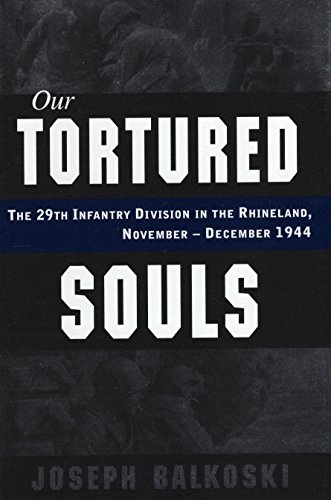 “Our Tortured Souls is the story of men who endured their own particular 45 days of hell on earth ‘in a very small place.’”

Joseph Balkoski is that happiest of historians: one whose career has demanded of him visceral knowledge of a topic compelling to both himself and his devoted readers.

Following completion of his graduate studies, Mr. Balkoski became and remains Command Historian for the Maryland National Guard. He has written several books on the history of the 29th Infantry Division during the Second World War.

Two days after the Japanese attack on Pearl Harbor, the various units of the Maryland National Guard were consolidated and federalized as 29th Infantry Division. The Division’s first duty assignment was in England, where it arrived during November 1942. It did not see action until June 6, 1944, when some of its units participated in the Allied invasion of western Europe.

In Our Tortured Souls, Joseph Balkoski memorializes the activities of the 29th Infantry Division from November 16 to December 31 1944. During that period the Division had as its objective an advance of roughly 15 miles from the Dutch border to the small German town of Juelich, which is situated near the Roer River. Twenty-ninth Infantry Division then was to cross the Roer and engage and destroy the enemy before its forces could cross the Rhine River. The Division did reach the Rhine by the end of December, but did so without destroying the enemy forces, which crossed the river to fight another day.

Mr. Balkoski’s narrative is based upon myriad excellent sources, from the captured records of German units that contested the 29th Infantry Division’s advance, as well as the Division’s own records, contemporary news accounts, letters from GIs to their families, and perhaps most interesting of all, the records of his personal interviews with American veterans who survived the ordeal and lived long enough to relate their experiences to the young historian.

As a result of Mr. Balkoski’s efforts, Our Tortured Souls is “personal” in a manner uncommon to most histories of its type. Indeed, it is more in the nature of a personal diary of events than the detached, analytical history written by many professional historians. And well it should be, for its focus is the experiences of individual American soldiers, some of whom had been in the Maryland National Guard for a decade or more, and others who were new to the army and newer still to the mortal combat in which it had been engaged since the beginning of June.

Ultimately, Our Tortured Souls is the story of men who endured their own particular 45 days of hell on earth “in a very small place.”

The 29th Infantry Division was in a rather wobbly condition by the middle of November 1944. As Mr. Balkoski points out, the bloodletting that the Division experienced on the Normandy beaches was only the beginning of months of hard fighting and dying. Throughout that period, the Division remained “in close and extraordinarily violent contact with the enemy.”

In August the Allies burst forth from the Normandy bocage country into territory more favorable to mechanized operations. In this effort the 29th Infantry Division carried out its assignment to capture the town of Vire; it did so while sustaining 3500 more casualties.

These events were followed by yet another six weeks of savage fighting for the French fortress at Brest, an enterprise that resulted in another 3000 dead and wounded for the Division. And in what Mr. Balkoski terms the “futile” fighting along the Dutch/German border in October, another 1700 men had been lost to 29th Infantry Division.

The travails of the 29th Infantry Division in traversing the 15 miles between the Dutch border and Juelich were a microcosm of the general Allied experience all along the western front in the late autumn and winter of 1944.

For each of those miles, fought in miserable conditions against a resolute enemy, cost the 29th Infantry Division 173 men killed or wounded, as well as many others who were evacuated from the front lines due to “combat fatigue.”

Nevertheless, the 29th Infantry Division steadfastly persisted in its mission in spite of the fact that in the end its efforts failed to prevent the Germans from crossing the Rhine to fight another day.