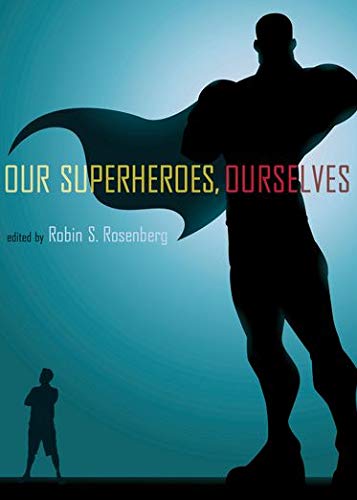 The myths and stories a society embraces speak volumes about what that society really is. The kids of ancient Greece wanted the strength of Heracles, the wanted to have the strength and brains to beat the nine-headed Hydra.

Thanks to the success of films such as Iron Man, the Dark Knight and Superman, today a child wants to be a millionaire genius that can build a yellow and red suit which will enable him to fly.

Superheroes are embedded into modern society. Superman is the ideal of truth, justice and high morals. Batman is seen by many as an antisocial, near psychotic loner driven by revenge. Spider-Man represents the perfect embodiment of a detached teenager who can’t get a grasp on the world around them.

No matter who you are, there is something about a superhero that you can identify with. There has to be a reason why so many of these characters resonate so loudly across such a large audience.

In Our Superheroes, Ourselves psychologist and author Robin S. Rosenberg gathers various writings on just this topic. Noted psychologists and scholars each take on a different aspect of this rise in the popularity of superheroes. For what we enjoy and celebrate almost always reveals something about us as individuals as well as a society.

The essays are broken into two categories. The first five essays focus on a better understanding of our own individual relationship to the superhero. The second five detail the humanity of the superheroes themselves.

Topics covered include the way justice is portrayed in the world of superheroes, the way that a superhero’s physical image can impact out own body image and the way the gifts we have as people (in real life) compare to the gifts displayed by the superhero.

Dr. Rosenberg sets the tone for this volume inside her opening essay about our current fascination with superheroes. She looks at the vivid imagination of the child and why they relate so easily to the idea of superheroes. There is an exploration of why we tend to like stories that resolve themselves in a familiar and comfortable way. As well as the other side of the coin; how we feel when a story contains unexpected death or unresolved endings.

Without dipping too deeply into the language of her science, she and the others write easily without pandering either to the cheap seats held by fanboys or the academics that can’t seem to function without multisyllabic discourse. The observations each makes are meant to enlighten and inform and lead to discussion, not intimidate.

This same skill in conveying complex ideas in a way that can be understood by almost all applies to the helpful introductory paragraphs Dr. Rosenberg supplies for each essay.

Examining Superheroes as Moral Pornography, Psychologists David A. Pizarro and Roy Baumeister dig deeply into the attraction of each. As part of that comparison they look into the basic morality of humans as contrasted with the exaggerated portrayal of natural behavior found in pornography and comics.

While many of the essays approach their subject from an empirical and research-oriented point of view, one of the most touching essays comes from Lawrence C. Rubin.

He tells of his experiences as a clinical psychologist. He speaks firsthand about the way the Superman origin story can be seen as a subtle narrative supporting the positive ideas at the core of adoption.

The trip from Krypton to Earth is seen as a metaphor for the trip from Honduras to Miami. With this in mind the journey of baby Kal-El becomes a quietly comforting notion that helps repair a sense of dislocation or disengagement from one’s true family.

Dr. Rubin asks that we as readers free ourselves of the unfair generality that superheroes are just part of Hollywood or that comic fans are small, marginalized part of society. He believes “. . . that the superhero mythos is a rich, complex and multilayered metaphor that appeals to readers and enthusiasts of all ages.”

Documenting the rise of emotions inside superheroes genre itself, Peter J. Jordan uses a chronological approach. Beginning his essay in the early sixties with the rise of Marvel, he dissects the growth of such concepts as confusion, worry, preoccupation and the fear of failure in the world of superheroes.

Suddenly a once proud world with clear delineations between good and evil now has families that fight (The Fantastic Four) teams that argue (The Avengers) and heroes who have homework (Spider-Man).

Many of the writers are long time comic fans themselves, often displaying a detailed familiarity of the genre. Robert J. Sternberg mentions The Shadow and reminds us of the deep and often forgotten connection that superheroes have to the pulps.

The Shadow is an early example of how a superhero doesn’t necessarily have to have superpowers. This concept comes to its ultimate fruition with Batman. Using this idea as a starting point he examines the role that true wisdom plays in heroics.

In a brilliant contrast between the fictional and the real world, he compares the natural and learned wisdom found inside superheroes to the elite education held by the Bankers who almost brought America down during the economic crisis of 2008–2010. What good is a Harvard degree if you can’t tell what is right and what is wrong?

Dr. Rosenberg has given readers a collection of insightful and thought-provoking writings that enhance the myths we have embraced. These essays expand our understanding of our society as well as our understanding of who we are.
Writings to be enjoyed by the super-fan who thinks that Tony Stark’s alcoholism should have been in the films and the movie fan who thinks Tony Stark is a funny scientist who built a red and yellow metal suit that can fly.