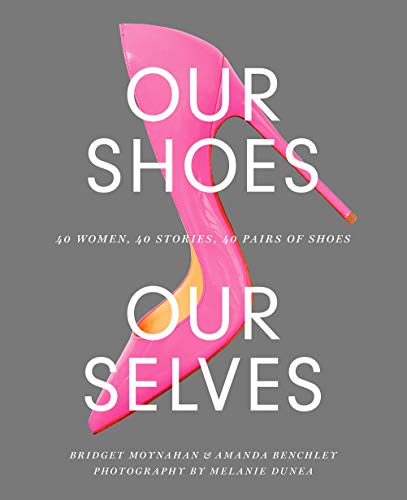 If you are expecting some sort of Sex and the City compilation of stories featuring brands like Blahnik and Louboutin, well then, this is not a book for you. Our Shoes, Our Selves is an incredible narrative composed of 40 stories by 40 different women who tell us what a singular pair of their shoes has and does mean to them.

This book is one that reminds us that there is such a thing as real memories, and that symbolic talismans of sorts still exist. Here a single pair of shoes plays a significant part of these women’s lives because of what they might conjure for their owners.

The variety of women who wrote these tales are as diverse as their selection of footwear, and it can be said that the emotions or reactions that each provoke are equally diverse. Most or possibly more than the vast majority of the personalities who offered their telling for this wonderful book are people you probably never heard of, and yet each story is compelling in its own way; don’t be deceived, there are lawmakers, astronauts, entrepreneurs, teachers, actors, and so many more professionals who may not have had the spotlight shone on them.

One of the book’s misleading features is the prominent name that appears as one of the authors as well as being the person responsible for the genesis of the book: Bridget Moynahan, the baby mama of Tom Brady’s love child and one of the stars of television’s most popular series, Blue Bloods. Interestingly enough, her contribution is mostly behind the scenes except for her own personal saga about her shoes.

The target audience for this book is not restricted to those who are only interested in fashion, as the stories reflect much more about human nature than what they do about the latest brand, trend,or style of shoes. It was a joy to read and very uplifting and fulfilling in ways that were certainly unexpected.

A tip of the hat to all the participants for sharing their very intimate and personal memories and remembrances of that one pair of shoes that they will never part with no matter their condition because of what they invoke for each woman.