Our Last Best Chance: The Pursuit of Peace in a Time of Peril 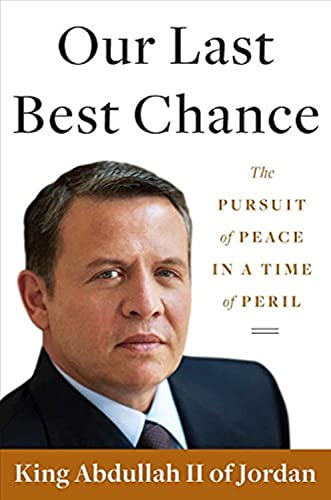 “King Abdullah closes the book with his hope of success and his fear of failure in the process. The title, Our Last Best Chance is not accidentally chosen. He conveys this honestly and deeply in the last two chapters. He hopes a lasting resolution can be found for the benefit of the children of the future, but fears that failure to do so will lead the region, and perhaps the world, into disaster.”

“If we do not seize the opportunity presented by the now almost unanimous international consensus on the solution, I am certain we will see another war in our region-most likely worse than those that have gone before and with more disastrous consequences.”

This is how King Abdullah opens the Preface of his book, Our Last Best Chance: The Pursuit of Peace in a Time of Peril. Among its strengths, the book offers a behind-the-scenes, detailed picture of the inner workings of the politics of the Middle East.

Part of the ongoing problem in the continuing Israeli-Palestinian conflict is that both Israel and the Palestinians lay claim to Jerusalem as their capital. And to further complicate things, this city is considered one of the three holiest cities in Islam.

King Abdullah chronicles first his father’s attempts at trying to mediate between Israel and the Palestinians. He goes on to describe his own efforts to settle the dispute. What comes out numerous times is both men’s combined frustration in dealing with the two parties.

One solution the author suggests is to share the city, and idea partially driven by his desire to undermine the opposition to peace. This is a reoccurring theme in this very well written and generally even-handed, book: to choose options for peace that eliminates the arguments of those who oppose peace and the process necessary to achieve it.

For example, King Abdullah writes, “Providing proper education and good jobs for young people is one of the most effective defenses against the siren call of the extremists.” Those who seek peace, not only in the Middle East, but around the world strongly agree as evidenced by recent similar statements from many influential leaders. People with a reasonable expectation of their ability to achieve prosperity are more likely to talk an issue through than blow it up.

Interestingly, the first 18 chapters, or 2/3 of this book are a well-chronicled and nicely crafted history lesson on the region, the conflict, the players and the king himself. This would have made an interesting book in itself.

It is really only in the last nine chapters that the book focuses on the details of a plan of resolution. There are several campaigns laid out in the ensuing pages with surprising detail.

King Abdullah is known as a moderate-to progressive leader, particularly for the Middle East, which has traditionally been more conservative over the decades. Before being thrust, almost overnight and to everyone’s surprise, into the monarchy of his homeland, he had gone to boarding school in the U.S. and received extensive military training at Sandhurst (the U.K.’s version of our West Point); therefore, King Abdullah’s view of the situation is wider than many others in the region, and he has some ability to see from different perspectives the challenges involved.

He takes the position of a neutral in his book. However, a point needs to be made here for clarification. Aswath Damodaran of the Stern School of Business at New York University is a brilliant finance professor and lectures the world over on Valuation. To paraphrase him, but substituting the word analysis for valuation, he writes, “All analyses are biased. The only questions are how much and in which direction.”

No author is completely unbiased, much as they might try. And this is true in this manuscript as well. The argument that peace is needed, and the sooner-the-better, is universally agreed upon. Who can do what, who is willing to do what and who has done what are the questions of contention. Whether one looks at the comments regarding President George W. Bush’s apparent “obsession” with Iraq, Prime Minister Netanyahu’s reneging on promises, or President Arafat’s intransigence, the reader must remember they are looking at information through someone else’s filter.

King Abdullah closes the book with his hope of success and his fear of failure in the process. The title, Our Last Best Chance is not accidentally chosen. He conveys this honestly and deeply in the last two chapters. He hopes a lasting resolution can be found for the benefit of the children of the future, but fears that failure to do so will lead the region, and perhaps the world, into disaster.