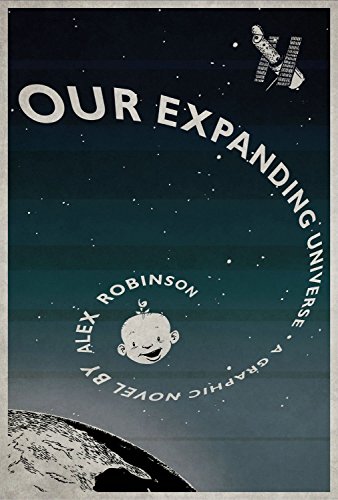 A trio of male friends navigate their relationships, jobs, and lives, as well as the changes over time in this slow-moving comic. Slow moving isn’t necessarily a bad thing: this is a comic to sit and enjoy, both in the art and text, from the themes to the dialogue, and not to be rushed through. Along the way, readers will remember their own pasts as they revel in the reminiscing of friends.

There is an unfortunate amount of misogyny in the text, but this may very well be due to the characters and a comment on society and less a preference of author Robinson, from the abused woman who wants to back to the man who hit her to the man having an affair and has excuses and gets forgiveness, to the women who are expected to have children and the men who are expected to be terrified of having them. Everyone appears to fit nice neat hetero-normative gender expectations.

Set in New York City, Billy runs a doggie daycare and is ambivalent about becoming a father; married father Scotty has one child and another on the way along with some secrets; and single Brownie is happy with Mr. Belvedere his cat, his pot, and his video games.

Interspersed with the slices of life stories are astronomy “shows” a la Neil deGrasse Tyson that show readers, and the characters, just how small their (and our) lives really are.

Because Our Expanding Universe is a true slice of life story, there is no nice neat ending, no bow-tying done: not everyone has a major epiphany or life lesson learned, but this isn’t done by Robinson, necessarily, with the intent of a sequel to this story—Our Expanding Universe really feels like a standalone comic—but because life doesn’t always wrap up neatly.

Robinson interweaves the textual narrative of the individuals seamlessly into the background imagery when creating flashbacks. The art is visually interesting with dialogue overlapping when characters interrupt each other; Robinson doesn’t follow a formulaic layout and it’s refreshing. It is unclear, however, why Robinson chose the layout he did for the section titled The Sirens of Brooklyn in which the dialogue is typed like a screenplay (with stage directions) and the art is in boxes scattered around the page. The break in format is distracting.

The friends meet up to play foursquare, eat, drink, and tell stories of the past. Our Expanding Universe is nothing but conversations. The characters are likeable and have well-developed story lines, depicting life as it really is in an excellent examination of friendship and marriage. Robinson tackles the thirty-something archetypes of exhausted parent, man-child, and fearful would-be parents.

Readers who loved Mr. Robinson’s Box Office Poison will be a bit put off by the more slow-moving story unraveling here of the mundane. However, long-time fans of Robinson’s will find some fun Easter eggs in the artwork.