Otto Wood, the Bandit: The Freighthopping Thief, Bootlegger, and Convicted Murderer behind the Appalachian Ballads 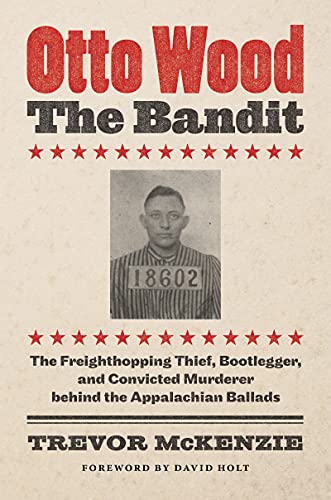 Toward the end of the 1962 western The Man Who Shot Liberty Valance, a character playing a newspaper man says, “When the legend becomes fact, print the legend.”

By and large they were sociopaths, psychopaths, cold-blooded killers and, in some cases, racists. Much the same is true for the subjects of Mexico’s contemporary narcocorridos—“drug ballads”—celebrating that country’s brutal drug lords.

So it is with the man at the center of Trevor McKenzie’s brief, academic biography: Otto Wood, The Bandit: The Freighthopping Thief, Bootlegger, and Convicted Murderer behind the Appalachian Ballads.

Appalachian music is famous for its “murder ballads,” many of which feature young women meeting a violent end near bodies of flowing water.

“I don’t know what it is about American folk songs,” Pete Seeger once observed. “They all end up with the girl getting killed.”

Mountain folklore is also known for its songs and stories about desperadoes who did these killings. Think “Tom Dooley” (Dula, in real life), from the Kingston Trio’s 1960s hit.

The song “Otto Wood, the Bandit,” written in 1931, was one of a number written about the outlaw. North Carolina’s Doc Watson popularized the song on a 1965 album with his son Merle.

“The story of Otto Wood is as twisty as the lyrics of the ballad that bears his name,” McKenzie writes. “Like all outlaw ballads, it selectively distills the complicated life story of a real criminal . . . The song begs for more facts. This is a true crime story hidden behind a ballad.”

In his slender new book McKenzie deftly threads the needle between fact and fancy, telling the story of the man behind the song.

In real life, Wood was neither Jesse James nor Robin Hood. By and large, he robbed middle class people and kept the proceeds for himself.

Still, McKenzie writes, “Wood’s use of the media and his jail and prison interviews made him a character, though disreputable, both sympathetic and altogether vivid in the public conscience of the Tar Heel State. Wood donned the disguise of a symbolic man of the people, a victim whose situation in life led him blindly off the path of an increasingly progressive South.”

Given the scarcity of reliable sources, McKenzie relies—with caution—on the abbreviated and sometimes fanciful autobiography Wood wrote in 1926 while in prison.

“Wood’s publication of his life story and frequent contact with press yielded attention that bordered on mania,” McKenzie writes, “as newspapers and the public both celebrated and criticized Wood’s rebellion against authority.”

The author also leans heavily on contemporary newspaper accounts and prison records. Wood was a master of media manipulation.

Folklore and media manipulation notwithstanding, McKenzie does not paint a pretty picture of his subject.

Wood was born in 1893 into a family of subsistence farmers who owned their land in Wilkes County, NC, on the edge of the mountains, not far from Doc Watson’s hometown of Deep Gap. The boy began his criminal career as a six-year-old bicycle thief (before he knew how to ride), graduating in the decades that followed to car thief, bootlegger, moonshine runner and, ultimately, murderer.

A largely unsuccessful bandit, Wood landed in at least five state prisons, numerous jails, and chain gangs across the South and Midwest.

Ironically, he proved more adept at escaping incarceration—at least 11 times—which led one writer to describe him as “The Houdini of Cell Block A.” This record was even more notable, given that he had one club foot and, after a hunting accident at age 18, just one hand—making him easy to chase and to recognize. McKenzie puts Wood into political and social context, analyzing how populism, the progressive era, and the Great Depression influenced his life.

Wood “reacted to and lived under the political and social environment that influenced Appalachians during his lifetime,” McKenzie writes. His boyhood poverty and his physical disabilities “placed the young man on a social fringe where his mindset of survive and profit was taken to the extreme.”

At one point, North Carolina’s reform Gov. O. Max Gardner made Wood the test case for his rehabilitation plans for the state prison system, calling Wood’s improved treatment in prison an “experiment in humanity.” The effort to make the inmate “a poster child for his reform-driven political platform” was temporarily torpedoed when Wood broke out of prison yet again.

For Wood, the escape further divided his image.

The sensational stories of his prison breaks “solidified Wood’s persona as a tactful, admirable fugitive with a self-timed sense of wit.”

While on one of his prison breaks, Wood attempted to rob a Greensboro, NC, pawn shop. Wood later said the proprietor, a Russian Jewish immigrant named Abraham Wolf Kaplan, resisted the robbery. Wood pistol whipped Kaplan and shot him in the shoulder, leaving Kaplan dead of a fractured skull.

Wood later wrote to a newspaper, claiming the killing was accidental, and he denied charges by Kaplan’s friends that he was motivated by anti-Semitism.

Captured, Wood was convicted of second-degree murder and sentenced to 30 years at hard labor. He was sent to Raleigh’s fortress-like Central Prison. Nonetheless, five months later he managed to escape yet again. He hijacked a car and then a bakery truck, fleeing across the state through Durham, Greensboro, and Winston-Salem en route back to his family home in Wilkes County.

Numerous rewards were offered for his capture. Four times the State of North Carolina declared Wood an outlaw, allowing any citizen to shoot him on sight, without legal consequence.

In Salisbury, NC, close to his home, on December 31, 1930, the local police chief and a deputy, acting on a tip, found Wood and an ex-bootlegger he was traveling with strolling on a downtown street.

Told to surrender, Wood pulled a .45 Smith and Wesson pistol and opened fire at close range on the lawmen. Eleven shots were exchanged in the melée. In the final one, Chief Robert Lee Rankin hit Wood in the head, killing him instantly.

There was much speculation about why Wood chose to shoot it out, since in similar situations he had simply given himself up or fled. As Doc Watson sang in the ballad’s chorus, “Otto, why didn’t you run?”

More than 5,000 people came to see Wood’s body when a local undertaker put it on display at his funeral home on New Year’s Day.

A spokesman for Duke University felt compelled to issue a statement denying a widespread rumor that it had offered $50 for the body for medical school research.

“In death Wood took his place in the pantheon of uniquely American criminals,” McKenzie writes.

News reports of Wood’s death from across the nation “balanced his image on a tightrope strung over the gulf between the infamous sociopath and folk hero.”

Negative publicity about Wood in the wake of his death “translated his previous persona of a romanticized highwayman to that of a mentally deranged, dangerous vigilante who victimized innocent people.”

Still, ten years after his death, a Wood manikin was still touring the state in a traveling “Crime Museum.”

McKenzie brings a unique, musician’s perspective to the book.

In 2010, Wood’s saga was turned into a summer outdoor drama, a staple of North Carolina popular culture, in North Wilkesboro. A fiddler himself, the author has played in the Elksville String Band, accompanying “Otto Wood: The Bandit,” which ran until 2015.

So, in the final section, McKenzie is especially qualified to analyze the folkloric process that Wood’s case illustrates.

In the late 1920s a musical genre called “hillbilly,” a forerunner to what would become country music, enjoyed a commercial vogue. Articles about Wood’s violent life and death “inspired lyrical tributes from several southern balladeers.”

“The ballads written about Otto Wood,” McKenzie writes, “though initially subject to the economic downturn that tanked sales of early country records, ultimately shaped what little is known about the outlaw today.”

Which is to say, they sing the legend.