The Other Side: Stories of Central American Teen Refugees Who Dream of Crossing the Border 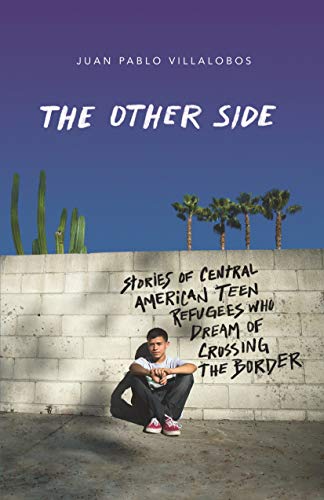 “Villalobos’ book is the type that readers will want to read for a second time. Highly recommended as a piece of good teen nonfiction.”

These short vignettes by Villalobos are simply captivating. He provides poignant snapshot pictures of a dozen Central American teenage refugees who courageously cross the U.S.-Mexican border. Based on true stories, these children make dangerous and sometimes deadly journeys in their quest to reach the United States to join either parents or relatives who have already braved the ordeal. These young teenagers flee from their respective countries—El Salvador, Guatemala and Honduras—to escape gang violence and poverty.

So many have little alternative but to leave. They knew their future looks hopeless and bleak if they choose to stay. Gangs have destroyed Central America, and they have turned everything upside down. People are abandoning villages, whole towns, leaving their crops and their animals to go elsewhere. People aren’t brave enough to talk about what is happening in their communities. If they speak out, they risk being targeted, beaten up, or even murdered.

For teens seeking reunification with family members, their journey often entails having to cross crocodile-filled rivers or surviving the blistering heat of the desert where the fear of dying of thirst is real. Dodging immigration checkpoints on the way is also the norm and getting caught and placed in a detention cell—known as the “freezer”—is terrifying. Nights spent in these cells mean dangerously low temperatures and sleeping on the floor or concrete benches with only a foil blanket given as means of warmth. We are introduced to Dylan who was one of the lucky ones who got placed in a children’s home because of his young age. He gives a good account of what this is like:

“Here in the home, every day is more or less the same. We get up, we wash, we have English classes, we eat breakfast, and they let us play football or basketball, or we watch films, we eat lunch, and the ones who are best behaved are allowed to play video games. I still haven’t got to play any video games though I don’t know why. We can go out into the yard if we want, but it’s cold, really cold. Even though they gave us all these thick overcoats. There are four beds in the room I sleep in. Every room has four beds. We also have to make the beds and take the dirty washing to the laundry room.”

At the center of every story lies credible fear, although some teenagers have known fear and discrimination their whole lives before leaving. Miguel is one of these young people. He is constantly mocked and jeered because he is gay.

“I went to school Monday to Friday. Sometimes on Saturdays I went to watch the other kids play, but when I did, my old friends were always around and implying things, saying stuff like ‘here comes the fagot’ and laughing at me for my sexual orientation. By that point, I’d stopped hanging out with them. If they were saying things like that then they weren’t my friends anymore; they didn’t have anything to do with friendship, because someone who treats another person badly is not a friend.”

Miguel endures threats of being raped and killed. His family is unsympathetic to his plight resulting in him experiencing the brunt of their homophobia—just as much as he receives from outsiders. Afraid to tell his father, he sets off to the United States in the hope of finding happiness and peace although he ends up living with his uncle who, too, is unaccepting of his sexuality.

Although the stories reflect hardship and suffering, they also portray bravery and great humanity, as well as humour and a sense of wonderment for the young people making these unknown journeys. The reader will discover the outcome of the teenagers’ journies once they arrive in the U.S. and are reunited with their parents, many of whom have remarried and had more children since settling in the country. A few young people study hard and achieve good enough grades to go to university, including one who is accepted into medical school.

Marianna, whose story is last in the book, tells of how her grandmother cooked a special supper for her the night before she left, consisting of a delicious soup with vegetables, chicken and rice. Later that evening when Marianna is putting things in her backpack for the journey, she realises that the rooster had escaped. She goes instantly to tell her grandmother, telling her that she has looked everywhere for the rooster. Her grandmother chuckles before replying, “Did you look in your belly?” At that moment, Marianne remembers the soup and starts to cry.

Villalobos’ book is the type that readers will want to read for a second time. Highly recommended as a piece of good teen nonfiction.