The Other Mrs.: A Novel 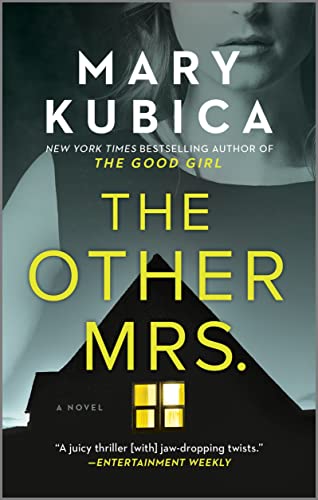 “How well we think we know those closest to us. And then, what a shock to the system it is to find out we don’t know them at all.”

Dr. Sadie Foust, husband Will, and their children have recently moved from their home in Chicago to a small island off the coast of Maine.

Will’s sister killed herself and her will left everything, including guardianship of her teenaged daughter, Imogen, to the Fousts.

The family had reasons for welcoming the move. Will had an affair, though he still contends Sadie imagined that. Oldest son Otto was expelled for bringing a knife to school to ward off bullies. Will’s sister’s death came at a most opportune time.

“At first, when we learned of the inheritance. I suggested to Will that we sell the home, bring Imogen to Chicago, but after what happened in Chicago, not just the affair but everything, it was our chance to make a new beginning. A fresh start.”

Not only does the family now have to absorb the shock of putting down roots in a new state, but they also have to contend with a teenager facing not only her mother’s death and strangers invading her home, but also with trauma of being the one to find her mother after she died.

“This girl is not the same little girl Will showed us in photographs. This girl is different, changed, but she comes with the house, just another thing that has been left to us in the will, mixed in with the house and the heiriooms.”

Seven weeks after the move, a murder occurs in the neighborhood. When the police question neighbors, Sadie, a doctor who works on the mainland, admits she barely knows anyone. Will, a househusband, is more acquainted and knew the victim, Morgan Baines, well.

As Wil answers their questions, Sadie realizes he knew Morgan very well, and her jealousy, aroused by that supposed affair again rises to the surface.

Soon after, Sadie finds a single word written in the frost of her car’s windshield: Die.

Did unhappy Imogen do it? Wishing these interlopers would leave her home?

As Sadie thinks more and more about Morgan’s death, she gets the feeling she’s being watched. That someone has been in her home. She discovers the neighbors told the police how they saw her smoking a cigarette in front of her house, that she had a violent argument with the dead woman, actually attacking her. Otto confesses Sadie was the one who told him to take the knife to school to defend himself.

Sadie knows these things aren’t so. She’d never met Morgan. She doesn’t smoke, and she’d never tell her son to take a weapon to school.

The discovery of a bloody washcloth pushed under the washing machine and another verbal confrontation with Imogen wrenches a confession from the girl; she didn’t simply find her mother after the suicide, she assisted her in killing herself.

Having killed once, could she have murdered Morgan in some bizarre effort to make the Fousts leave?

That doesn’t explain the people insisting they’ve seen Sadie in places she would never go, doing things she’d never do, or the threatening notes or the bloody washcloth—or the knife she finds buried in the front yard, a knife similar to the one described as used to kill Morgan.

When the police arrest her for Morgan’s murder, Sadie will get all the answers she needs and many she doesn’t want.

“How well we think we know those closest to us. And then, what a shock to the system it is to find out we don’t know them at all.”

The Other Mrs. is a dazzler of a thriller, so convoluted as to promote vertigo while appearing truthfully straightforward; In fact, the reader may at first be somewhat angry at being so fooled by the author.

To be fair, the author warns the reader of this fact: “I’m not going to tell you everything. Just the things I think you should know.”

After that moment passes, there will be nothing but admiration for the originality of Kubica’s creation.

This does make for some challenges for a reviewer, however; how to say what needs to be said about this novel without making it nothing but a series of spoilers?

Told from the point of view of Will, Sadie, a child nicknamed “Mouse,” and Camille, the “other woman,” The Other Mrs. will lead the reader down one path, letting him think he knows where it will lead, letting him believe he has all the facts laid out plainly before him. And he does—in a way—just not in the way he thinks. By the time the most quick-witted figures out what’s going on, it’s too late.

Kubica has also created one of the most wicked villains the reader will meet in a very long line of literary baddies.

The Other Mrs. Has been optioned by Netflix as a feature film. This is a book eagerly read and will be a cinematic event eagerly watched.