The Other Family: A Novel 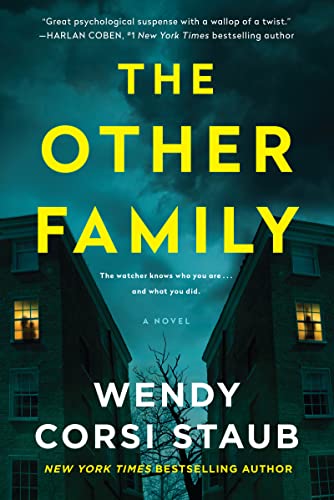 “The Other Family will keep readers on edge until the final satisfying scenes.”

The Other Family focuses on multiple point of view characters, it also brings place in as if it, too, has its own voice. The opening line provides a clue that location is central to the plot. “The Howell family moves into 104 Glover Street in Brooklyn, on the Friday before Labor Day.”

Nora and Keith Howell believe their new start in New York will solve the complications of their lives in Los Angeles. With daughters Piper, 14, and Stacey, 17, they arrive at the brownstone they plan to call home.

Nora is a gardener. She’s also engaged in a secret relationship with someone named “Teddy,” but what that relationship entails remains a mystery through much of the novel. “Teddy is not a regular person. Teddy, unlike so many people in Nora’s life, is unforgettable.”

Continued proof of the importance of the house arrives at the top of the second chapter. Simply titled “Jacob,” it reads, “Even now, a quarter of a century later, he visits the house.”

Jacob is a watcher, and what he watches is 104 Glover Street. He also watches the Howells. He’s caught in the past, trapped in the history of that address and the violence that played out inside the walls.

“A triple family homicide—father, mother, daughter—drew attention, even in New York, even in those violent days, with the homicide rate at record highs amid the crack epidemic.”

Oldest daughter Stacey is obsessed with true crime, but that doesn’t mean she wants to live in a house where an unsolved murder occurred—even if it was more than two decades ago.

After learning of the murders, she feels unsafe in her new home. She wonders why the house wasn’t updated to include better locks. “Maybe whoever fixed it up thought no one would be stupid enough to live in a place where a family had been slaughtered.”

But she and the rest of her family are there for a year, and there’s nothing she can do about it. Despite her belief she’s being watched by a stranger, she can’t act.

After struggling with issues back in Los Angeles, she’s convinced there are only two possibilities if she tells anyone the truth. “If her parents believe her, they’ll freak out and move them all right out of this house. And if they don’t believe her, they’ll probably haul her off to a shrink.”

Straub does an excellent job of keeping the various point-of-view characters in their own distinct voice, changing up her writing as we view events through a variety of eyes, and faithfully capturing the tenor of each.

Shifting back and forth, the story unfolds. The history of the house and central characters comes out, each twist and turn and reveal adding to the suspense.

Neighborhood residents Heather and Jules arrive on the scene. The couple’s children instantly become entwined with the Howell teens. Courtney befriends Piper, while Stacey finds herself alternately fascinated and repelled by their son Lennon.

Is he truly entranced with Stacey as well? Or is his fascination with the past murder more of a draw? Is he thoughtful boyfriend material? Or is he forming an unhealthy attachment with signs of a domestic abuser?

As the two families interact, the agendas of the characters continue to work at odds with each other. Straub does a beautiful job of showing how parents and children can misunderstand each other. Stacey fears telling her parents the truth, and they misunderstand how their child is suffering in silence.

As with all good psychological suspense, Straub plays with what the reader knows as fact. The constantly shifting “truth” of events, and the roles each character plays, makes for a tense read.

The Other Family will keep readers on edge until the final satisfying scenes.