The Other Face of Battle: America's Forgotten Wars and the Experience of Combat 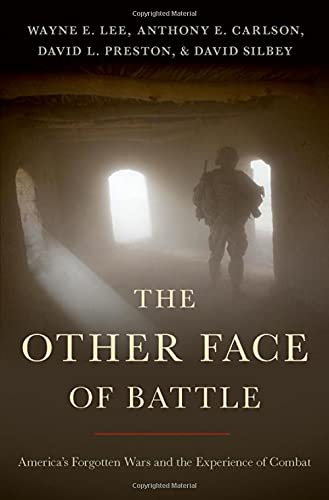 “the US military is again neglecting the lessons learned from the last 20 years of conflict in the messy and uncertain fields of insurgency and asymmetric wars to return to the more familiar realm of great power peer conflict.”

This new volume pays homage to Sir John Keegan’s classic history of close infantry combat, The Face of Battle. Written in the 1970s, it was a groundbreaking look at the experience of individual soldiers in England’s great battles throughout history.

The authors explore the experiences of American soldiers fighting in unconventional conflicts wrapped up in a thesis that essentially states America’s military has historically prepared to fight a similarly equipped and trained adversary, only to find itself more often at war with an asymmetric foe it is unprepared to fight. This asymmetry is often culturally derived, compounding the challenge the American military faces when seeking battle against an enemy fighting with different tactics, rules of war, and strategic objectives.

To develop and expand on their thesis, the authors use a case study model constructed around three relatively unknown battles from American history: Braddock’s defeat at the Monongahela in 1754, the American conquest of the Philippines in 1899, and the Battle of Makuan during the Afghan surge of 2010.

The defeat of British General Edward Braddock’s British regulars by a much smaller force of French troops and their Native American allies is presented as a perfect example of a smaller force succeeding in battle by using tactics more suited to the terrain to overcome a weakness in numbers.

When the French and Indian War began, the seizure of what is now Pittsburgh was a key objective of British forces and their colonial allies. General Braddock led a large force of British troops trained for the traditional open field, set piece battles common in Europe at the time. But the large and unwieldy force, weighed down by artillery and a huge wagon train, was ill-suited for the American wilderness that was mostly uninhabited and devoid of roads and towns.

When the French and their allies executed a near perfect ambush in a dense forest, the British could neither deploy their artillery or their infantry into battle lines and were nearly annihilated as their dispersed column was almost encircled by their foe. As the authors note, General Braddock’s disdain for the capabilities of the native tribes to achieve surprise and maneuver in the dense forest led to his overconfidence in the ability of his troops to deal with this asymmetric threat. His defeat and death in battle ended any British threat to the French hold on the Ohio River valley for the next two years.

Between each case study, the authors summarize the most significant changes to technology and warfare, setting the stage for the next analysis. In the summary between the Battles of the Monongahela and Manila, the primary events noted were the increased professionalism of the US Army and the substantial changes to weaponry, particularly the adaption of magazine fed rifles, primitive machine guns, and rapid firing artillery.

When the US defeated Spain in 1898 and took possession of the Philippines, assuming the mantle of an imperial power, there was an almost immediate response from Filipino nationalists led by Emilio Aguinaldo seeking to complete their struggle for independence. Once Spanish rule was formally ended and the U.S. moved to annex the islands, a confrontation began building in the capital city of Manila.

Examining both the racial and cultural influences of the battle as well, the authors highlight the strengths and weaknesses of each army, noting this was the last conflict where the US Army relied on large numbers of state volunteer regiments, while the Filipino army was riven by ethnic and sectarian differences that prevented a more unified force to resist the American advance out of Manila to defeat the besieging Filipino force.

After their resounding defeat, the Filipino forces did not attempt to engage in conventional combat but resorted to an irregular insurgency, the first foreign guerilla war encountered by the US military that would last until 1902. This case study sets the stage for the second interlude chapter, the US military's challenging and hesitant relationship with fighting insurgences and other "small wars” for the remainder of the 20th century, particularly in the Cold War era.

This relationship became even more challenging as the US moved into the post-Soviet era, when local adversaries in Somalia, Bosnia, and eventually Iraq and Afghanistan began adapting strategies and tactics to negate overwhelming US conventional military power and force the US into costly and controversial counter-insurgency efforts that were difficult to win in the political arena.

This leads to the final case study, the Battle for Makuan, Afghanistan in 2010, at the time the biggest US Army operation of the war. This battle, fought at the height of the Afghan surge in Kandahar province, was a textbook case of asymmetric combat in the 21st century, pitting dug in Taliban forces surrounded by a maze of ambush sites and improvised explosive devices (IEDs) against the conventional forces of the US Army and its Afghan Army allies.

Launching an assault into the overgrown and tough terrain that was littered with IEDs of all types proved particularly challenging for the US infantry, forcing them to methodically neutralize the IEDs while under fire. While tactically the American forces and their allies were able to overwhelm their Taliban opponents, capturing the key city of Makuan in Zhari district, the long term strategic and political goal of retaining control of the terrain and population, the keys to winning a counter-insurgency campaign, proved more elusive.

The authors conclude with their judgment that the US military is again neglecting the lessons learned from the last 20 years of conflict in the messy and uncertain fields of insurgency and asymmetric wars to return to the more familiar realm of great power peer conflict. They issue an admonishment that conflicts of the last half century have shown that the military remains more likely to be engaged with unexpected than anticipated opponents, an important reminder that any conflict can be asymmetrical and unpredictable.