Ostend: Stefan Zweig, Joseph Roth, and the Summer Before the Dark 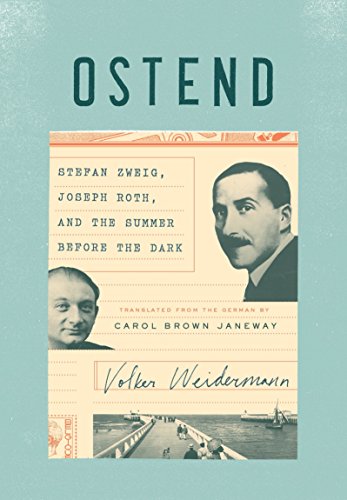 After the release of his quirky 2014 movie The Grand Budapest Hotel, director/writer Wes Anderson confessed to The Daily Telegraph in London, “I stole from Stefan Zweig,” though not many readers on either side of the Atlantic recognized the name Zweig or knew much about the Austrian Jewish writer whose bestselling novels and biographies were turned into popular movies in Europe and the United States in the mid-20th century. Zweig’s Beware of Pity and The Post-Office Girl, both of which offered fodder for Anderson’s film, have recently been translated anew and published in English.

Ostend is a new book about Zweig and his creative and dysfunctional friends, including Joseph Roth, and the brief time they spent together in 1936 in Ostend, the Belgian resort town, as Europe prepared to destroy itself. Written by Volker Weidermann, published originally in German in 2014, and translated into English by Carol Brown Janeway, Ostend might appeal to fans of The Grand Budapest Hotel and Wes Anderson’s other movies, including The Royal Tenenbaums that won an Academy Award in 2001. Ostend might also send readers to Zweig’s fiction, though one critic dismissed it as “the Pepsi of Austrian writing.” Still, sometimes a Pepsi is precisely what one craves.

Ostend is brief—176 pages—it moves quickly, and it’s written in the present tense, which gives it a sense of immediacy. Moreover, it boasts a cinematic quality that invites readers to imagine it as a movie with heaps of alcohol, sex, and intrigue.

In the first chapter, Weidermann, the literary editor at a major German newspaper, sets the stage for his historical melodrama and introduces the leading figures, all of them refugees from fascism. None of their names are likely to stand out, except perhaps for that of Arthur Koestler, the Hungarian-born author, famous for Darkness at Noon, his fictional expose of totalitarianism.

In addition to Zweig and Joseph Roth—an eastern European Jewish writer who chronicled the decline and fall of the Austro-Hungarian Empire—Ostend offers portraits of Ernst Toller, Hermann Kesten, Egon Erwin Kisch, and two beautiful women, Irmgard Keun and Christiane Grautoff, who dismissed the very exiles whose company she kept. Weidermann offers an amusing quotation in which Grautoff observes of Zweig and his friends, “they were all too old and too boring and they kept saying the same things and most certainly they would never be right. But they often were.”

Weidermann conjures the spirit—the zeitgeist one might say—not just of Ostend, but also of an entire continent as it lurches toward catastrophic events that upended the civilization to which Zweig and his friends belonged and that they helped to create. If the exiled writers and intellectuals appear in these pages as neurotic, narcissistic, and naïve, they’re also endearing figures who scrambled to save themselves and escape the clutches of the fascists who rounded up Jews and sent them to death camps like Auschwitz. Near the end of Ostend, Weidermann aptly describes Zweig as “a flaneur from old Europe on the edge of war.”

He also offers a quotation from a letter Zweig sent to Romain Rolland, the French pacifist, novelist and Nobel Prize winner, in which he sounds as relevant today as when he first said it. “We need to create a fanatical anti-fanaticism,” Zweig wrote. A gentle fanatic, he gave his life to literature at a time when Europe divided itself between Aryans and Jews, fascists and communists, pacifists and war-mongers and when Irmgard Keun, who was not a Jew, told her Jewish lover, Arnold Strauss, who had fled to the United States, “I would rather let myself be beaten to death in a German concentration camp than live the rest of my life gratefully and humbly by your side.” Passages like this—there are others—give the reader pause.

Ostend doesn’t have footnotes or a bibliography. It doesn’t need them, and, while it is based on research, it wears its scholarship lightly. The book offers one photograph of Zweig and Roth wearing ties and jackets, drinking wine at a café in Ostend in 1936.

If Weidermann’s work has a flaw or two it might be that there are too many literary figures, their wives and lovers squeezed into 176 pages. There’s not just Zweig and Roth, but Zweig’s first wife Frederike, who was Jewish; and his mistress, secretary, and later second wife, Lotte Altmann, who was also Jewish and who met the world-famous writer when he was 53 and she was 26.

In the background there are a half dozen historical figures, including Charlie Chaplin, whose film Modern Times came to movie screens in 1936, and those two world-famous boxers, German-born Max Schmeling and the African American Joe Lewis who fought for the first time in 1936 when Schmeling won. And there Hitler himself and his long dark shadow.

Weidermann doesn’t promote 1936 as a pivotal year that altered the course of history, but it’s apparent from reading Ostend that it was crammed with extraordinary events, including the Olympics that took place in Berlin and that Germany won. The background to Weidermann’s tour de force is as strong as the foreground.

Ostend ought to appeal to readers interested in Jewish studies and European culture between the two world wars, and also to writers who want to learn how to weave a chronicle about literary figures into the sweep of history—and to do it without huffing and puffing.

At the end of his book, Weidermann mentions in passing the German invasion of Ostend that took place on May 29, 1940. By that time, Zweig was living in exile in Brazil. His friend, Joseph Roth, had already died in Paris in 1939. Weidermann leaves it to Roth to sum up the significance of Zweig and his generation of European-born Jews who “have no home, but they have graves in every cemetery.” Zweig and Lotte Altman committed suicide in 1942 by taking barbiturates not far from Rio de Janeiro in a house now known as the Casa Stefan Zweig. Ostend honors them, their memory, and their fanatical anti-fanaticism that lift them above obscurity and into the pages of literary history.