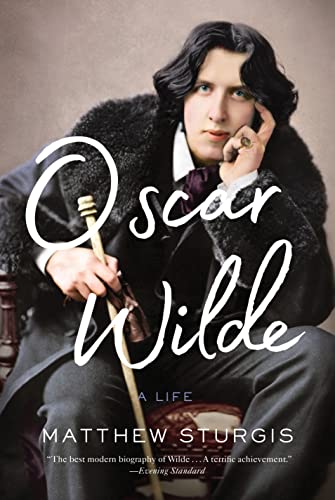 “Oscar Wilde: A Life is elegantly written . . . Dense with detail, it draws the reader into Wilde’s milieu. Sturgis allows the reader to make of this rich material their own interpretation of this many-faceted artist.”

The number of books written about Oscar Wilde’s life attests to the fact that he has been almost as fascinating to other people as he was to himself. The early biographies were by men who knew him. His beloved Lord Alfred Douglas, who lived until 1944, first attacked Wilde’s pernicious influence on him (it was probably the other way around), then decades later took credit for some of Wilde’s best lines.

Matthew Sturgis’ new addition to the Wilde canon is the most comprehensive biography so far. Sturgis is not a literary scholar like Ellman. He is, however, an expert on the late Victorian period and the author of biographies of Wilde’s friends and illustrators, Aubrey Beardsley and Walter Sickert. Sturgis offers the richest picture of Wilde’s relationships with myriad writers and artists.

Sturgis’ dense portrait of Wilde presents a born performer, a self-absorbed man who made himself a celebrity before he established a reputation as a writer. One can see parallels to the many contemporary figures who are famous for being famous. He presented himself as the avatar of the aesthetic movement and was delighted when he was satirized in print and onstage. He became famous for his performances as a lecturer in England and across the United States. What becomes clear in Sturgis’ book is that his public persona set many critics against him from the start. His plays were hits with the audience but not with the critics who found Wilde’s extravagant persona repellent.

Wilde’s exhibitionism leaked into his sex life. In a period when homosexual activity was the subject of scandal and scrutiny, his liaisons with working class boys were held in fancy hotels and restaurants and sometimes in his own home. He understood and perhaps relished the danger of these encounters, which he once referred to as “feasting with tigers.”

More dangerous yet was his open romance with young Alfred Lord Douglas, son of the famously litigious and brutal Marquis of Queensbury. Wilde saw his love for this monumentally selfish aristocrat as a version of ideal love for which he was willing to risk his family and his reputation. The mad Marquis was determined to destroy him. Sturgis sees Wilde’s unwillingness to flee to France and avoid facing trial as an expression of Wilde’s indolence. It was, actually, far more complicated than that. Wilde, who saw his life as an unfolding drama in which he was the star, became the leading figure in a tragedy, a victim of fate whose story had to play out. Perhaps deep down he also felt the need for the horrendous public shaming he faced.

Sturgis offers a detailed picture of Wilde’s two years in prison. Once friends in high places saw to it that he was moved from London prisons to Reading Jail, his treatment was not unduly harsh. The warden allowed him books, writing materials, and friendship. The “hard labor” involved sewing coal sacks rather than working at the even more onerous task picking oakum.

After prison, Wilde was always scraping for money. His return to Bosie endangered the income his wife gave him. In Naples, he and Bosie had to move from hotel to hotel because the British guests would not stay if the scandalous Wilde and Douglas were on the premises. The relationship with Bosie waned. Wilde spent much of his time and money on liquor and boys. Other than “The Ballad of Reading Gaol” and “De Profundis,” stripped of its attacks on Bosie, Wilde published nothing in his last years.

As it did in his lifetime, Wilde’s personality, his performance of self, can easily overshadow his writing. In England the plays have been revived regularly. His work, particularly The Picture of Dorian Gray and “The Portrait of Mr. W. H.” is seen as crucial to the development of a gay literary canon. His essays on art and socialism are still read and analyzed. If his poems have been overshadowed by his plays, fiction, and essays, they still are rich representatives of an important movement in late Victorian literature. Yet the greatest story is the life of this looming presence, this celebrant of self.

One of the most vivid images in Sturgis’ book is of Wilde sitting on a low stool in Walt Whitman’s Camden, New Jersey, home as the American bard held forth from his comfortable chair. Wilde’s poetic style couldn’t be more different than Whitman’s, yet the men represented the same exaltation of ego and homoeroticism.

Oscar Wilde: A Life is elegantly written, as a book on Wilde must be. Dense with detail, it draws the reader into Wilde’s milieu. Sturgis allows the reader to make of this rich material their own interpretation of this many-faceted artist.