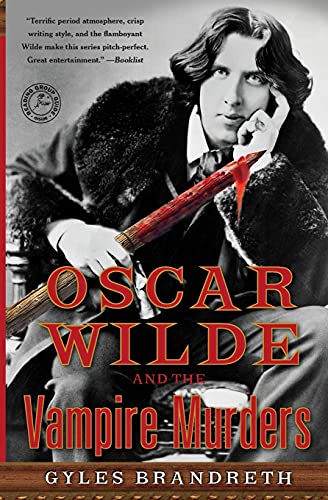 “Oscar Wilde and the Vampire Murders takes the flamboyant playwright on another rollicking mystery ride with friends Arthur Conan Doyle and Bram Stoker in tow.”

The name Oscar Wilde conjures up the image of a brilliant Victorian-era playwright: a man who challenged social norms, whose humor was arguably the best of its time, and whose sharp, timeless wit is quoted even now, over a century after his death.

What “Oscar Wilde” may not conjure is the image of a super sleuth who wears carnations in his buttonhole and trails opium smoke in his wake in the parlor—and this image is exactly how Gyles Brandreth has reimagined Wilde in Oscar Wilde and the Vampire Murders.

The fourth book in Mr. Brandreth’s Oscar Wilde mystery series, Oscar Wilde and the Vampire Murders takes the flamboyant playwright on another rollicking mystery ride with friends Arthur Conan Doyle and Bram Stoker in tow. Only this time, instead of merely solving crime over dinner, Wilde is faced with a supernatural opponent: vampires . . . or is he?

The plot of Vampires is steeped in delightful Victorian melodrama, complete with accomplished actors, beautiful people, and of course, the flamboyant nature of Wilde himself. Only a slightly predictable, and troubled only by a tepid mid-section, Vampires delivers a satisfying mystery. And perhaps best of all, despite being the fourth installment in a series, it stands alone, so that new readers are instantly welcomed to the Wilde party.

Mr. Brandreth’s characterization of Wilde is that of a witty—sometimes acerbic—playwright, which is consistent with what we know of Wilde today. Mr. Brandreth uses a wide variety of Wilde’s original quotes (which fans will recognize) to provide backbone for the character, and then fills in the gaps with witticisms of his own. This would ordinarily be a fine authorial tactic—except that many of the sayings seem a bit overwrought.

But by the same token, one must commend the author for his usage of Victorian-esque language and mastery of Wilde as a character. Even the most avid of Wilde fans have to admit that he is nearly perfectly captured in Mr. Brandreth’s prose, as are Doyle and Stoker. Through Mr. Brandreth’s storytelling skills, Wilde becomes less of an enigma and more of a personification.

Mr. Brandreth’s writing will not lose readers who like teeth to their stories: It’s just complex enough for the tale it tells, without too much extra fluff. And Vampire’s quiet narrator—one Robert Sherard, a journalist and contemporary of Wilde himself—offers a unique, close-up-and-personal perspective on Wilde, even though the account is entirely fictional.

Mr. Brandreth has once again succeeded in mixing history with mystery, fact with fiction. Wilde fans eager to get closer to the master himself will delight in this latest offering. And mystery fans looking for an alternative to the conventions of the genre will enjoy the witticisms and setting in Vampires. Although not for everyone, Oscar Wilde and the Vampire Murders continues down the path of Victorian-era intrigue laid down by its predecessors in the series—and leaves room for more.