Oscar and the Very Hungry Dragon 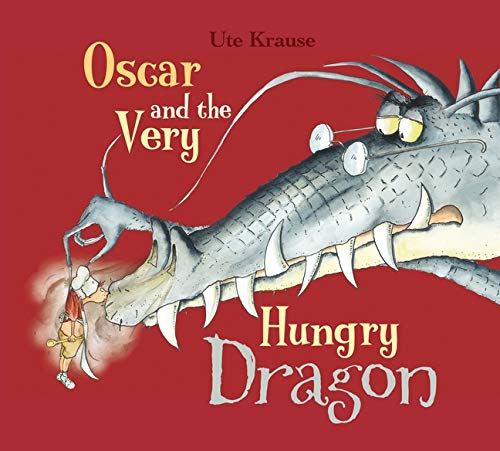 Oscar and the Very Hungry Dragon by Ute Krause reads very much like a bedtime tale. Unfortunately, this means the dialogue isn’t particularly creative. As well, the writing is stilted, which isn’t necessary even though the author is writing in simple sentences. The attractive illustrations are ink and watercolor.

On the outskirts of a village, a dragon awakes and he must be fed a plump princess, who has fled town. So the mayor, a la Shirley Jackson’s The Lottery, has children put their name in a hat so that one may be picked for sacrifice. Oscar is chosen and sent to the dragon.

Oscar is kept in a cage, and with a reminder from the Hansel and Gretel fairytale, Oscar gives the dragon a stick to feel instead of his finger, and the dragon determines Oscar is too skinny. The dragon brings back ingredients for Oscar, who loves to cook, in hopes to fatten the boy up. Eventually the dragon gets glasses, realizes he’s been tricked, but decides to make Oscar his personal chef.

It is unfortunate that Krause has encouraged the ideas of females (e.g. the princesses) fleeing from danger, and that none of them have the intelligence or wit of the male protagonist, Oscar, who is able to fool the dragon. It is a dark tale that the children must be sacrificed, and there is no suggestion the town ever thought of anything else. As well, the parents make no attempt to rescue their children from this terrible fate. The best Oscar’s mother can do is cry, then recognize the smells of her son’s cooking and realize he’s alive—and still there is no rescue attempt.

The book’s size and style would make it ideal for a story time, but the tropes Krause conforms to will turn off feminist readers. This book is for children ages 4–8, but can be read to younger readers, too.