The Orpheus Descent: A Novel 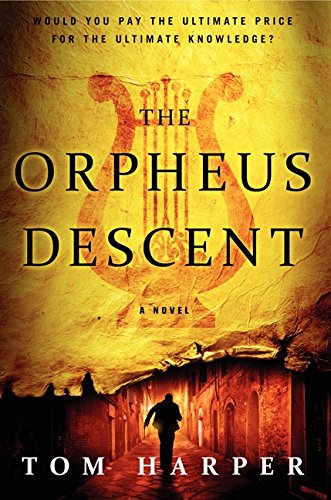 “In The Orpheus Descent, Harper uses his novelist’s skills to plausibly recreate time and place—his settings in ancient Italy and Greece are strong—as are his characters, including some genuine historical figures . . .”

In The Orpheus Descent by Tom Harper two story lines bisect: historical fiction is feathered into a contemporary mystery/conspiracy in symmetrical alternating chapters. This can be disconcerting at first, but readers soon become accustomed to the pattern.

To make it easier for readers to follow, Harper employs two fictional voices: the historical storyline develops in the first person while the contemporary plot unfolds as a third-person narrative. Surprisingly this bifurcated approach works well because Harper is a skilled and competent writer.

In the tradition of Indiana Jones the contemporary conspiracy/thriller plot treads a more or less predictable path. An archaeologist, Lily, works on a dig in Italy where she discovers a gold micro-tablet with a message that supposedly holds secrets of the afterlife, the very pathway to hell itself.

She signs a nondisclosure agreement (NDA) along with two colleagues and the precious find is secured in a safe. But when Jonah, her musician husband, at the end of a music tour in Europe, hurries to join her at the site, although there are signs of her recent presence in their room, she disappears . . . and so does the tablet.

The remainder of this storyline is generic mystery/thriller plot: evil Greek billionaires with yachts, strange emails and phone message, red herrings interspersed with flashbacks to the pre-marriage romance of this 30-something couple.

Many of these romantic liaisons occur in caves, caves carved out by the ceaseless flow of millennia of ocean currents. They literary implication is obvious; Lily and Jonah frolic in the same water that Plato, and even perhaps Orpheus, knew. Knowledge defies time in continuous patterns; what we sought after then, we seek today. What better transitional device to establish the Platonic parallel story. Most 12th grade high school students and certainly university freshman, if they know only one “fact” about the philosopher Plato, it is that he wrote the allegory of the cave in his seminal Socratic dialogue The Republic.

But the strength of the novel is Harper’s recreation of the ancient Greek world that assimilates philosophy, more pertinently metaphysics, into the Orphic myth along with a retelling of Plato’s journey to Syracuse. Well-documented history substantiates that such a journey occurred and that something happened on that journey to change Plato’s worldview.

In The Orpheus Descent, Harper uses his novelist’s skills to plausibly recreate time and place—his settings in ancient Italy and Greece are strong—as are his characters, including some genuine historical figures: the tyrant Dionysus, ruler of Syracuse, and his relatives, Dion and Dionysus II.

The novel is well paced, and both male protagonists experience terrifying odysseys in caves although they live 2,000 years apart. Dreams, philosophical discourses, and strange synchronicities add to the complexities. Ultimately we are not made privy to secrets of the afterlife and hell, although Jonah in true Greek heroic fashion, literally snatches his wife from the jaws of hell, a gaping abyss that belches volcanic material from an erupting Mt. Etna.

A satisfying, thinking person’s read for a summer vacation.