The Orphan of Salt Winds 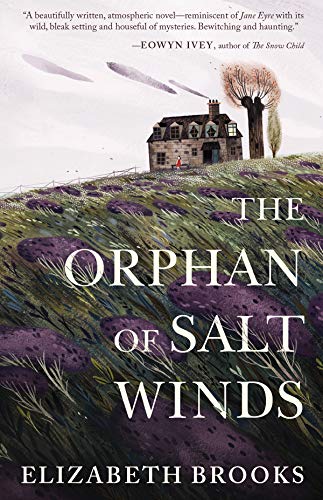 “The Orphan of the Salt Winds is a gothic novel both because of its sinister setting—an old, remote house filled with secrets and surrounded by danger—and a heavy air of menace. There are dark secrets, grim deaths . . .”

When she found the curlew skull, Virginia Wrathmell knew it was the day she would die. Convinced her fate predestined, she believed each New Year’s Eve held the possibility she’d find the awaited sign indicating this would be her last. The curlew inextricably linked with her past, at age 86 she finally breathed a sigh of relief.

Picked out of an orphanage decades before by the desperate hope of a couple hopeful the distraction of caring for a child would fix their marriage, ten-year-old Virginia wasn’t there a full day before she understood her place in the family dynamic. The wildly beautiful but treacherous marsh surrounding their home Salt Winds became a metaphor for her entrapment: She would never know any but the most fleeting safety or happiness. The land itself was bent on her destruction, the marsh capable of sucking her in and suffocating her.

Her father Clem’s fondness her one consolation, her adoptive mother—the beautiful but distant Lorna—proved herself at best indifferent. Not an evil figure, Lorna was a melancholy wisp of a thing who, anxious to make peace in their home, went along with Clem’s suggestion that the presence of a child must be the spark she needed to fulfill her purpose.

When it became apparent his wife lacked any maternal instinct, Clem took over the role of virtual sole parent to Virginia, caring for and teaching this brightly enthusiastic child who absorbed his knowledge about the natural world like a sponge. But if you follow no other rule, he warned, never walk into the marsh. Himself able to navigate it safely, for anyone unfamiliar it was treacherous.

With Clem’s own abrupt, mystifying disappearance a few years later, the realization dawned her own fate was inextricably linked with his. One day the land would claim her, its power absolute, its abiding presence sinister.

Clem gone, long-suppressed secrets began surfacing, some unsurprising but others astonishing to Virginia. Losing her husband, Lorna began shifting. At the same time she drew Virginia in, facts about her past and identity repelled the girl. One particularly disturbing truth lay in the relationship between Lorna and the somewhat stock character of their wealthy neighbor, the widower Mr. Deering.

The Orphan of the Salt Winds is a gothic novel both because of its sinister setting—an old, remote house filled with secrets and surrounded by danger—and a heavy air of menace. There are dark secrets, grim deaths, and grasping, dangerous figures filling Virginia’s world. Moments of happiness flash into her life then are gone, violently stolen.

Elizabeth Brooks’ grasp of the genre is evinced by the inclusion of integral elements. What distracts are periodic clunky dialogue, overly written passages verging on the twee, and a heavy reliance on adverbs, disrupting the flow of an otherwise very good story.

The problem is the gothic cannot afford disruption; it’s crucial the reader sink in deeply, perhaps more so with this genre than most other. If a writer cannot sustain a grim and foreboding atmosphere, the spell is broken.

Overall a good novel, The Orphan of the Salt Winds fails to deliver at a high level. Had it avoided a few sophomoric pitfalls, it could have been quite good indeed. As written, it just misses.