The Strange Order of Things: Life, Feeling, and the Making of Cultures 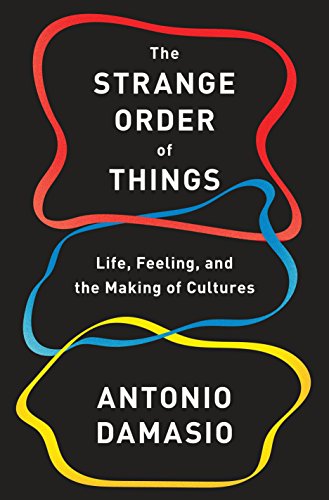 “He takes the reader on a journey from single cells, to nervous systems, to self-conscious, self-directed minds. One can’t fault him for lack of vision or ambition.”

Fans of Antonio Damasio knows that he likes to tackle big questions, and The Strange Order of Things is no exception. His quarry this time is homeostasis, a topic he has lectured on for a while. Conventionally defined, homeostasis is the propensity of all living things to maintain a stable internal environment (or milieu). It is the regulation of life within a certain range that that makes survival possible.

In this book, Damasio goes further than convention, calling homeostasis “the powerful, unsought, unspoken imperative” that ensures an organism will both endure and prevail. More subtly, it ensures that life will be regulated within a span that is not merely compatible with survival, but also “conducive to flourishing, to a projection of life into the future of an organism or a species.”

In his view it counteracts entropy, the tendency of things to drift into disorder. But it doesn’t just maintain a previous state of order: It raises it to a new level.

Damasio argues that homeostasis reaches back to the biological roots of human cultures. It is the basis of emotions—unlearned, automatic behaviors that play themselves out. Feelings serve as “arbiters and negotiators.”

At its most fundamental, homeostasis is the motivating force behind everything that we think and do (in creatures without self-reflection it remains the motivating force behind their behavior). It is at work whether we are “assessing the merits of an idea,” pondering religious beliefs, morality, or political governance, or engaged in “the arts, philosophical inquiry, and the sciences.”

Skeptics will pounce, of course, at the author’s daring. But he is clear when addressing humanists that he is not reducing cultural phenomenon to their biological roots, nor claiming that science can explain “all aspects of the cultural process.” He does take the reader on a journey from single cells, to nervous systems, to self-conscious, self-directed minds. One can’t fault him for lack of vision or ambition.

Yet he finds it a curious omission that feelings “rarely earn a mention” in discussions about the evolution of human intellect and culture. He begins his long counterargument with single-celled organisms, which rely on “chemical molecules to sense and respond” (his emphasis). At a higher level, he argues, intensely social animals such as ants, bees, and mammals acquired their complex behaviors “from their biology, not from Montessori schools or Ivy League colleges.”

What follows as he ascends the scale to us today is breathtaking, thought-provoking, and simply fun. Agree with the author or not, the book is an enjoyable read. It will challenge many of the reader’s assumptions as well as the status quo.

Part I covers life and its homeostatic regulation, which he shows to be a collection of phenomena rather than a single thing. All operate without a need for consciousness, free will, or intent. Part II explores how the cultural mind came to evolve. It dwells on the “overlooked” privileged interactions between the body and its nervous system. These are of an entirely different quality from those the nervous system has with the environment. Part III concludes with “the cultural mind at work.”

Along the way Damasio emphasizes embodied cognition, the notion that the mind does not arise solely from the brain but from the interaction of the entire nervous system with the physical body. He also reverses the common belief that life began with the chance evolution of genes, arguing instead that the homeostatic imperative existed in the very first life forms, to be followed later on by genetic material.

This arrangement is how genes generate progeny and the ultimate end of homeostasis, which is to project a species into the future so that it endures.