Oppose Any Foe: The Rise of America’s Special Operations Forces 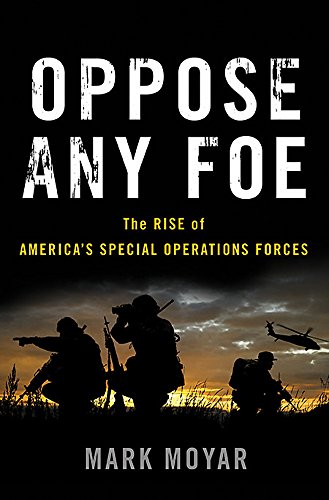 “this volume provides a good overview of the genesis, history, and thorny relationship these elite units have had within the American military.”

Conventional military forces and their leaders have always had an uneasy relationship with so-called “special forces.” The growth of these elite units, particularly during and after World War II, has spawned a nearly continuous clash over budget, missions, and the overall utility of these units within the established military hierarchy.

Mark Moyar’s new look at the American military’s experience with special forces provides not only a condensed narrative history, but a deeper analysis of bureaucratic and budget fights; and the larger questions that persist on how these units fit into the strategic and operational environment of America’s recent military conflicts.

World War II provided a fairly rocky introduction to these units. Although the Army Rangers, Marine raiders, and Navy Underwater Demolition Teams (UDTs) performed useful tasks in nearly all combat theaters during the war, they were constantly viewed with suspicion by more conventional military officers, and after the end of the war, other than the Navy retaining a small number of UDTs, the military disbanded these units in the quick demobilization.

As part of the history on the clandestine and commando forces during the war, the book highlights the often muddled roles and missions between the military’s commando and special forces and America’s first real clandestine operators, the teams sent into France and Southeast Asia by the Office of Special Services (OSS), the forefather of today’s CIA. The tension between the military and the OSS is an interesting foreshadowing to the more recent disagreements between the CIA and military on roles and missions post 9/11.

The Cold War, especially America’s major engagements in Korea and Vietnam, brought back a number of special forces, including the Rangers, the Army’s Special Forces, à la the “Green Berets,” and the modern Navy SEALs. But even the capabilities and exploits of these forces were not able to overcome the flawed strategy in Vietnam and again, once that war was over, these units were closed down and this capability atrophied.

The rise of terrorism in the 1970s and 1980s really brought special forces like the Green Berets and Rangers, and later, the even more elite Special Operations Forces such as the Army’s Delta Force and the Navy’s SEAL Team Six to the fore and gave them an ongoing purpose that could not really be replicated by conventional military units.

In addition, Congressional legislation in the 1980s, beginning with the creation of a separate Special Operations Command within the U.S. military hierarchy and the all-important granting of this command its own budget line, has made these units into nearly their own branch or service, answerable only to the President or senior combatant commanders.

Since 9/11, the Joint Special Operations Command and other elite units have often taken the lead in hunting down terrorists in Iraq, Afghanistan, and other global hot spots, including the most famous terrorist hunt of all, the raid into Pakistan to kill Osama bin Laden in 2011.

But as Moyar notes, the seeming invincibility of these forces has masked larger problems stemming from overuse of the units since 2001, leading to some morale and discipline problems, and sometimes avoiding larger questions of how these units should best be used to further America’s strategic interests.

Many of the long-standing tensions between conventional and special forces within the military remain today. Even though these units have now provided officers into the senior ranks of their services, they are still often viewed as expensive luxuries that absorb a vast amount of talent and resources.  But they also provide very specialized capabilities that give policy makers options short of a large military effort and will no doubt remain a key part of America’s military and foreign policy toolbox.

While it is not a complete narrative history of these units, each of which could have multiple volumes written on their exploits, this volume provides a good overview of the genesis, history, and thorny relationship these elite units have had within the American military.

In the final chapter, the author uses his background as a strategic analyst and military instructor to provide context and issues to consider going forward; Special Forces and Special Operations Forces (yes, they are different) are here to stay and their integration and proper utilization in American foreign policy will continue to be a challenge in an increasingly dangerous world.