Operation Dragoon: The Allied Liberation of the South of France: 1944 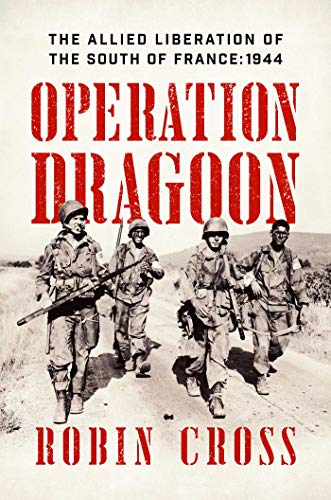 “an overlooked but important part of the Allies 1944 campaign to defeat Nazi Germany and this well-written and engaging volume should help it emerge from the shadow of the more heavily studied invasion and breakout from Normandy.”

Operation Dragoon, the Allied invasion of Southern France, has largely been overshadowed by the myriad histories of Operation Overlord and the Normandy breakout. However, Allied commanders, particularly General Eisenhower, considered these landings to be an important component of the Allied plans to liberate Europe and defeat Nazi Germany. Not only would the landings allow the Allies to capture the key Mediterranean ports of Marseille and Toulon, they would provide the potential to trap and destroy the German 19th Army in southern and western France.

In this absorbing new look at the mostly forgotten amphibious landing of American and French troops in the French Riviera, Cross provides a fresh perspective on this operation, providing a behind the scenes look at the intense political struggles waged by Americans, British, and French commanders over the strategic wisdom and practical logistics of conducting the operation.

Winston Churchill was heavily opposed to the plans for an invasion of Southern France, stubbornly clinging to his vision of a soft European underbelly and desiring to insert Allied troops into the Balkans to meet the advancing Red Army as far east as possible. Because of his viewpoint and other British objections, the assault and subsequent actions to liberate Southern France were carried out almost exclusively by American and French troops. In the end, General Eisenhower, the Supreme Allied Commander, had to personally demand a landing take place to break the political logjam with Churchill.

Because of all the political machinations, the invasion planning seemed very hurried and improvised, and the author does a great job of explaining how the American commanders, particularly Alexander Patch and Lucian Truscott, worked with their French counterpart Jean de Lattre de Tassigny to not only pull together the troops, vehicles, and supplies, but more importantly the required shipping, with many vessels hurriedly sent to the Mediterranean after participating in the Normandy landings. The Allies even managed to scrape together a polyglot of airborne units and transport aircraft to accomplish vital missions to support the landings.

One significant difference between the Normandy and Riviera landings that has not been well chronicled was the significant contribution of the French underground, now well organized as the French Forces of the Interior (FFI). The support of the invasion by French paramilitary forces supplied by Allied air drops has never been fully told.

By the time of the Allied landings, large portions of the southern French countryside were under their de facto control as German forces, reduced by the transfer of many units to the Normandy front, confined themselves to the larger towns and cities. FFI units were critical in several important missions, particularly preventing the Germans from completely destroying the port and harbor facilities of Marseille.

However, the less than enthusiastic support from the Allied high command meant the invading forces did not have nearly the troops or material available that had been provided for Overlord and as the troops moved off the beaches, the shortages of men and vehicles provided significant challenges to meeting the ambitious objectives of the Allied commanders. Although the German army suffered significant losses during their retreat up the Rhone Valley toward the German frontier, like their counterparts in Normandy thousands of German troops escaped Allied encirclement efforts to make their way into the Vosges Mountains during the fall of 1944 to stabilize the front.

The narrative ends shortly after the linkup of the American Seventh and Third Armies to establish a solid Allied front from the English Channel to the Swiss frontier. The battle narrative, especially the bitter fighting around Montelimar as the German 19th Army tried to escape encirclement showed the combat was every bit as intense as the hedgerow fighting in Normandy.

The invasion and campaign to liberate Southern France stands as an overlooked but important part of the Allies 1944 campaign to defeat Nazi Germany and this well-written and engaging volume should help it emerge from the shadow of the more heavily studied invasion and breakout from Normandy.