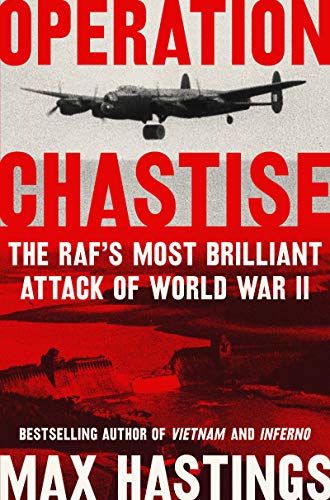 “an incredible tale of technology and heroism.”

There were many daring and risky air operations during World War II, such as the Doolittle Raid and the twin bomber attacks on Regensburg and Schweinfurt, but probably none received more attention at the time than the Royal Air Force bomber attack on Germany’s Ruhr dams in 1943. Using his considerable background and narrative skill, Sir Max Hastings covers this operation from its genesis, through the technical and tactical developments that made the operation possible, and then takes the reader into the cockpit of the bombers that carried out the attack.

Drawing from memoirs and numerous other personal accounts, Hastings goes beyond a traditional unit history to not only tell the tale of the British engineers and aircrews, but the German civilians living below the dam and their tales of survival during the attack. His sympathetic weaving of all these individual experiences show the wide range of effects this battle had on the survivors from both sides.

As air power came into its own between the world wars, all the world’s major powers wrestled with the proper doctrine and employment of increasingly sophisticated and capable aircraft. After Hitler swept them from France, England’s only means of striking back were the raids from the RAF Bomber Command. Even before the war, Bomber Command considered the utility of bombing German’s Ruhr dams that provided water and hydro-electricity to a significant portion of the industrial complex residing in the region. However, neither the proper weaponry or aircraft to carry them existed.

But one man, Barnes Wallis, had a vision of building a weapon that could be carried by a modified version of England’s newest heavy bomber, the Avro Lancaster, that could in theory breach a massive dam structure. Essentially a giant depth charge, if the weapon could be skipped along the water to sink right at the dam, the hydrostatic shock of its explosives could potentially breach the base of the dam. RAF leadership was skeptical that the bomb could be built, but as Hastings relates, Wallis was determined enough that he was allowed to build and test a prototype that proved the weapon could work.

The story kicks into high gear with the introduction of 617 Squadron, the unit selected to conduct the attack. This squadron was a typical RAF bomber unit mostly, but not completely, made up of volunteers for the mission. Hastings goes into a fair amount of background on these crews, including their hard charging leader, Wing Commander Guy Gibson. Merely 24 years old when he led the mission, Wing Commander Gibson had already served a lengthy combat tour in bombers and time in fighters as well.  He led a squadron of incredibly young men, nearly all under the age of 30, many of whom were also combat veterans and were skeptical of their prospects for success or survival.

But after a short and intense training session, the squadron succeeded in the mission, breaching the Möhne and Eder dams and sending a literal wall of water down the valleys below the dams. When the mission was over, 1/3 of the squadron had been lost to German defenses. But the survivors were feted by their superiors in the RAF, eager to show that England still had some martial prowess, including the awarding of the Victoria Cross to Gibson, who tragically did not survive the war.

Now Hastings provides a harrowing tale of the death and destruction metered out by the breached dams, with entire German villages virtually swept away. Tragically, many of the victims were slave laborers in Germany, including dozens of Russian, Polish, and Ukrainian women. In spite of the heavy damage, the Germans rebuilt the dams in a matter of months, now under an impenetrable defense network, and no other significant bombing attacks were made for the rest of the war.

Hastings puts a final perspective on his book by opining that modern readers may be shocked that a civilian dam was deliberately targeted, noting that after the war a modification was made to the Geneva Conventions making such an attack potentially a war crime. However, as he also notes, modern readers have not experienced a truly total war for national survival so the actions of the brave RAF aircrew should be examined under that prism.

This is truly an incredible tale of technology and heroism. More importantly, it is a story of combat and its effects on ordinary people trying to survive during the costliest air campaign of the 20th century.