Opera in the Jazz Age: Cultural Politics in 1920s Britain 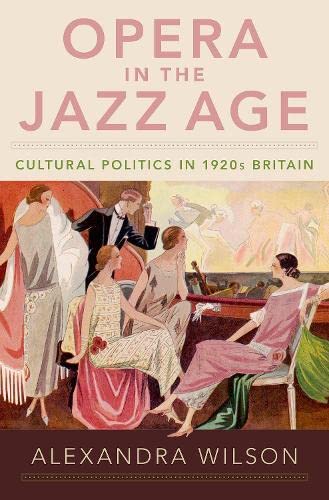 English opera in the 1920s may seem to some an odd topic. What we now know as the Royal Opera did not begin until after World War II. Before that time there were short seasons of opera provided by touring companies created by commercial impressarios. The Royal Opera House was also rented out for a variety of events including variety shows and motion picture presentations.

The Sadlers Wells Opera, which became the English National Opera, alternated with ballet and dramatic performances beginning in the 1930s.  Moreover, audiences were not interested in opera written by British composers until Benjamin Britten triumphantly entered the scene in 1945 with Peter Grimes. Disgusted with the infighting at Sadlers Wells, Britten, and his partner Peter Pears founded their own company, the English Opera Group.

Why then write about opera in England in the 1920s? Alexandra Wilson’s subtitle, Cultural Politics in 1920s Britain, justifies her focus. Wilson is interested in how opera, seen as a “foreign” art form, fit into the British cultural scene in the 1920s.

She is particularly interested in where opera fit into the ongoing discussions of “highbrow,” “middlebrow,” and “lowbrow” art and efforts to combat charges of elitism. For highbrow critics, opera, a hybrid genre, did not deserve the same status as “pure” symphonic or chamber music; for populists, opera was European and, worse, feminine. Did that make opera decidedly “middlebrow”? For Wilson, opera in the decade was interesting precisely because it could not be pinned down in this system of cultural categorization.

While for some opera was identified with relatively posh Covent Garden, there were many attempts over the decade to popularize opera, to justify it as an art form for the masses. Touring companies, particularly the British National Opera Company, which operated from 1922 to 1929, brought opera to working men and women in industrial areas outside of London.

They also played short seasons as Covent Garden. The BNOC had an ambitious repertory and published its own magazine to promote opera for the masses. The Old Vic Theatre in the working-class neighborhood of Lambeth presented opera as well as Shakespeare. Although Covent Garden presented seasons of opera in the original language, most opera was presented in English. This was standard practice in Europe. Outside of New York City, which had a large population of European immigrants, opera was usually presented in the native language of the country, not the original language of the work being presented. Wilson describes in detail the many attempts at popularizing opera.

Wilson devotes one chapter to repertoire in the 1920s. English audiences were far more receptive to Wagner than they were to Italian composers. Puccini was popular, though attacked by highbrow critics who particularly disdained Italian bel canto and verismo opera and tended to ignore all of Verdi except the more symphonic Otello and Falstaff. Mozart was barely performed. Richard Strauss, the only contemporary German composer to be performed, was represented only by his earlier works, particularly Der Rosenkavalier. There was little public interest in the operas of native composers Holst, Vaughan-Williams and Ethel Smythe.

Wilson discusses ways in which the popularity of the gramophone and, later, radio, added to efforts to make opera a more popular art form. Opera excerpts became widely available through recordings and the BBC presented opera broadcasts. The promotion of celebrity divas through recordings, radio broadcasts and magazine articles also contributed to the popularization of opera. Divas endorsed household products in magazine advertisements. This only led to more scoffing from the highbrow critics.

Wilson is conscious of the parallels with the situation of opera companies in our era, beset even more with charges of elitism and trying to find ways to reach new audiences through HD transmissions and the Internet.

Opera in the Jazz Age will be of interest to cultural historians as well as students of opera. The book is well organized. Wilson’s style is readable if not particularly eloquent. One can certainly see that arguments she recounts from the 1920s are still ongoing in Britain and elsewhere.