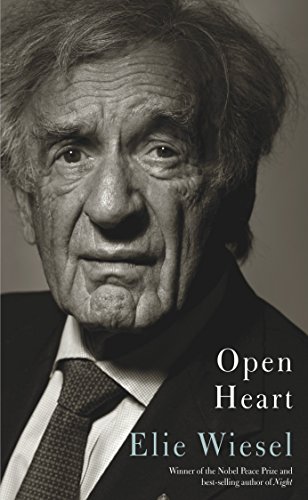 “Elie Wiesel delivers a message of hope and tolerance in Open Heart.”

Elie Wiesel has produced many excellent works of fiction and nonfiction. Most of them are in whole or in part related to his experiences as a Holocaust survivor.

At age 82, in June of 2011, Wiesel is rushed to a hospital with severe coronary artery disease. He has several blocked arteries that only open-heart surgery can resolve. Suddenly faced with the prospect of death, Mr. Wiesel reflects upon his life, his experiences during the Holocaust, and his life since the Shoah.

As he is wheeled into the operating room, he reminisces about the terrifying agony of his imprisonment in the Holocaust, his survival, and the glorious wonders of life, love, family, and work left undone.

Mr. Wiesel comprehends the gravity of his abruptly serious health issue, which frightens his wife and son as much as himself. He gazes into his past, filled with trepidation, gloom, and death.

Virtually everyone he loved as a young man had been murdered by Nazi Germany during the Holocaust. It was the darkest portion of his life and of humanity’s existence. Unexpectedly he is once more threatened with losing everyone he loved.

Admitting that there are no easy or swift answers to such questions, Mr. Wiesel proffers cryptic responses, such as, “It is not for us to decide how or why God acts.” Or “God exists within the questions as well as the actions.”

In the end, Mr. Wiesel can deliver no coherent meaning from the Holocaust. He seeks a different direction for salvation. During his recovery from heart surgery, his little grandson asks, “If I loved you more, would you be in less pain?” Mr. Wiesel realizes at that moment that “God is smiling as He contemplates His creation.”

Mr. Wiesel proclaims he is part of a generation abandoned by God and betrayed by mankind. He reflects how humans have attained “perfection in cruelty.” He wonders how humans could have attained such a dichotomy of normalcy, “for the killers, the torturers, it is normal, thus human, to act inhumanely. Should one therefore turn away from humanity?”

These ethical bombshells remain for the reader to scrutinize, while no logical conclusion is apparent from the author. He later resolves “It is up to each of us to choose between the violence of adults and the smiles of children, between the ugliness of hate and will to oppose it.”

Speaking from experience, he tells us “even in darkness it is possible to create light and encourage compassion. It is possible to feel free inside a prison. Even in exile, friendship exists and can become an anchor. In one instant before dying, man remains immortal.”

Mr. Wiesel believes in man in spite of man. He believes each of us can use words to wound or to console, to curse or to heal, to comprehend or disregard, just as “Illness may diminish me, but it will not destroy me.” He proffers that, “the body is not eternal, but the idea of the soul is. The brain will be buried, but memory will survive it.”

“Such is the miracle,” is how Mr. Wiesel closes his thoughts. A tale of despair becomes a tale against despair. He finds singular beauty in the smile and love of his grandson that his misery over the Holocaust is diminished.

Yet what are we to believe about Holocaust survivors who have no loving family members? Can such despair be overcome when the survivor has no adoring grandchildren?

Elie Wiesel delivers a message of hope and tolerance in Open Heart. A successful husband, father, grandfather, teacher, and writer, he is an asset to humankind. He has turned despondency into a message of approval and optimism.

At 82 and ill, Mr. Wiesel remains a powerful ambassador of tolerance and hope, for humanity will always require this message, a bright light in the darkness of despair, a signpost on humanity’s road toward destruction and “turn to tolerance and survive.”

This is Elie Wiesel’s eternal message. We are each a spark of light in the darkness of destruction.