One Soufflé at a Time: A Memoir of Food and France 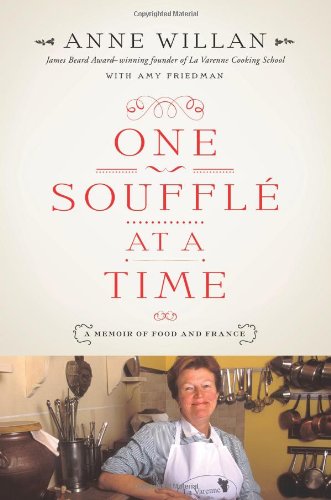 Sandwiched between Julia Child and the stars of the Food Network, Anne Willan has quietly made a significant contribution as both a teacher and a cookbook writer specializing in French cuisine for the home cook for over 35 years.

Standing on the shoulders of Julia Child, (along with her financial backing), Ms. Willan opened La Varenne Cooking School in Paris in 1975, a more Anglophone friendly version of Le Cordon Bleu. In the mid-1970s Ms. Willan writes in her memoir, “French cuisine was becoming a portal by which Americans were rediscovering the culinary arts after a long dormant period that began in the 1930s with the taming of vegetables in cans, followed by the 1950s and frozen foods. Julia had opened the front and led the battle, and now La Varenne was the place people could have the Julia Child experience, a working laboratory of classical French cuisine.”

And therein lies the crux of this herky-jerky memoir with unremarkable recipes shoehorned into each chapter: Anne Willan cannot escape the long shadow of Julia Child.

If one of the aims of One Soufflé at a Time is to allow Ms. Willan to step out of Julia’s shadow and take her place along side her as her equal, then it falls flat, like a soufflé that has collapsed in the oven.

Because of the many references to her association with Julia Child that are sprinkled throughout the book, the reader is almost compelled to make comparisons.

Although born a generation apart and on different continents (Anne Willan is a naturalized U.S. citizen who was born in England), there are many obvious parallels between the two: they both were the daughters of wealthy parents who grew up eating bland meals yet nevertheless displayed hearty appetites.

Neither one had a particularly stellar academic career, they both consumed Dover sole meunière on their first trip to France and they both married intellectual men with balding hairlines who worked in the public sector, had a posting in Paris, and were genuinely supportive of their wives’ careers. They also both studied at Le Cordon Bleu.

Where they diverge greatly is in personality and influence. Julia Child had an outsized personality that matched her physical stature and was universally adored (and still is) by legions of fans. She was a natural in front of the TV camera and she had an innate gift for marketing herself.

Julia Child was the kind of game-changer that comes along only once in a blue moon. When it came to demystifying French food for the American home cook, Julia Child was peerless.

Anne Willan, on the other hand, while continuing in the tradition of Julia Child, does not match her in wit, enthusiasm, or impact. She comes off (at least in her memoir) as the forgotten younger sibling to the dazzling older sister who garners all the attention.

It is easy to see why Anne Willan may feel overlooked. By her own admission she “was not very good at selling [herself].” Her cooking school in Paris eventually closed because of financial difficulties and was moved to (ahem) her 17-bathroom chateau in Burgundy. Her cookbook La Varenne Pratique may have won an award the year it was up against Julia Child’s The Way to Cook, but it is now out of print whereas The Way to Cook is not. And as for being an enduring TV personality, you can buy a boxed set of the highlights of Julia Child’s PBS series The French Chef while even a YouTube search for Anne Willan’s PBS Look and Cook series that aired in the 1990s turns up nothing.

Where Ms. Willan does shine, however, is as a food historian. Her 2007 book The Country Cooking of France and her 2012 book, The Cookbook Library are both important works for which she received considerable praise.

It really is a shame that Anne Willan felt compelled to write a memoir—it does nothing to raise her stature and offers no new insights about the food world from the mid-1970s onward.

A good food memoir (or any memoir for that matter) should engage and inspire the reader so that he/she feels satisfied at the end. After a heaping helping of One Soufflé at a Time you may be left wondering, Where’s the beef?