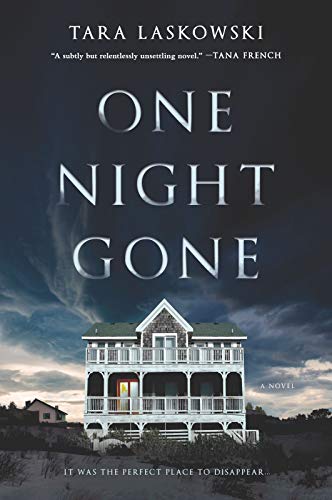 This contemplative thriller commences in the summer of 1986 in Opal Beach, New Jersey, when posters dotted the area of a missing girl named Maureen Haddaway. From there it segues to 2015 when Allison Simpson's world falls apart, and she lands in the tiny town.

Allison, a meteorologist for a local Philadelphia TV, disgraces herself while on the air after learning of her husband, Duke's infidelity. She proclaims to the viewing public during her weather forecast:

"Down here in South Annapolis, you'll be seeing some rain this weekend. So, if my husband, Duke, is watching, you should know, honey, to bring your umbrella this weekend when you and your little girlfriend go off to your beach house weekend getaway.

"And a tip to all your adulterers out there—if you like treating your umbrellas like you treat women, then you can toss out your old one and head over to Macy’s this weekend where they're having a sale.

Because of her angry blunder, she is now without a job or home, but her sister, Annie finds her a house-sitting position for three months in a palatial home in Opal Beach. While licking her wounds, Allison looks forward to regrouping and redefining her life, especially happy to be living at the seashore during the quiet off season. She hopes she can remain incognito and not be acknowledged as the scorned wife and fired weathergirl.

Welcomed by the locals, Allison is befriended by Tammy, a native to the area. She soon discovers she is recognized, and in this town, everyone knows everyone

else's business whether they like it or not. Allison wonders if she should be embarrassed and hide in the ocean-front manse or laugh it off and socialize, though Tammy makes sure she gets her out.

When the story of Maureen, the missing girl from 30 years ago, becomes the main topic, Allison becomes intrigued, particularly after discovering she had been a close friend to Tammy.

One Night Gone could almost be considered two novels as we learn about Maureen, the young runaway who worked for the carnival the summer of 1986, and how she ties in with Tammy.

Allison and Tammy try to discern what happened to her all those years ago.
Both are captivated by Maureen's disappearance as Tammy recalls what the girl was like. Maureen was almost always with Tammy as well as Clay Bishop, a summer resident whom Tammy liked, but he turned his attention on Maureen, though she was considered way beneath his status. Maureen came to love her new friends and wanted to remain in town, but one day she goes missing and no one has any idea to where or why.

A somewhat uncommon element about this novel is that Maureen tells her story in the present tense, whereas Allison's is told in the past. Though these two never meet, their lives almost parallel each other. And it is unusual some residents mistake Allison for Maureen though the latter is older, believing they look alike.

“It felt as if Maureen had completely taken me over, like she’d seeped into the very walls of the house. I could hear her whispers in the wind gusts. When I closed my eyes, I saw her face flickering from the grainy film, a haunted, hollow laugh.

“She’d had three months, too. Three months of an endless-seeming summer to figure it all out. To hold her life in the palm of her hand. And instead, she’d opened her hand too soon, scattered it all to the ocean breeze. Three months in Opal Beach, and then she’d vanished. How easy it had been for someone to get rid of her without a second thought. How easy for her to just disappear.

“The sadness settled over me. I felt trapped, like everyone here in Opal

. . . “And what would become of me?”
Though a mystery, this story is also a coming-of-age tale and how two lives surreptitiously intermingle through the years. The portrayals of the location with the briny sea air, the tang of coffee from Tammy's shop, and the brisk Fall breezes whet the senses, along with the complex characterization of each character to make this an intriguing read.