One Nation Under God: How Corporate America Invented Christian America 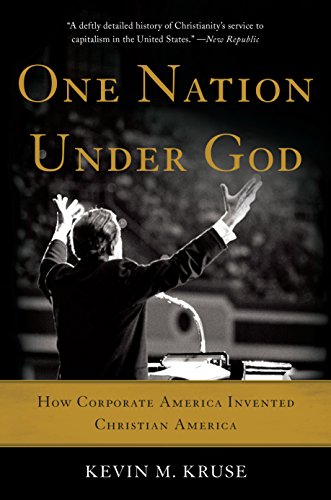 When the state of Indiana recently passed the Orwellian-sounding Religious Freedom Restoration Act in 2015, little did the lawmakers and Governor Mike Pence expect a swift blowback. It was an act of legislative hubris created to paper over the tyranny of the majority. An alleged majority fed by decades of misinformation, arrogance, and bullying.

The misinformation involved the myth that the United States was a “Christian Nation.” While the term hearkens back to the halcyon years of Ronald Reagan's ascendant New Right cozying up with the Christian Right, Kevin R. Kruse traces “Christian America” back further. The myth of “Christian America” begins in the Great Depression. Kruse's new book, One Nation Under God: How Corporate America Invented Christian America, offers an enlightening history of corporate collusion, clerical venality, and a credulous public.

Unlike other books with sensational titles, Kruse writes with clarity and authority. As a history professor at Princeton, he marshals an astonishing archival arsenal in service of his thesis. The archival sources for One Nation Under God run for two pages. No claim goes undefended as he deconstructs the false narrative that feeds into the minds of the American public.

But his arguments thread a needle between the definition of “cultural Christianity” and “Christian America.” Critical comprehension is required. Christianity in its various forms has been the religious practice of the American majority. But the Founders did not create the United States Constitution as a tyranny of the majority. Kruse focuses his narrative on the concerted effort by a conservative businessmen and like-minded clergy to create a false foundation myth of American history. In the words of pop culture, they retconned American history for their partisan agenda. The American public bought it and the Religious Freedom Restoration Act is but one of the poisonous mushrooms cultivated from this putrid soil.

Kruse begins his narrative with a little known event in American history. In December 1940 the National Association of Manufacturers (NAM) met for their annual meeting at the Waldorf-Astoria in New York. Their agenda was simple: Engineer a public relations rehabilitation for capitalism. After the Great Depression and the New Deal, wildcat strikes, and countless new federal regulations of business, they wanted to hit back. Ideally, they wanted to reclaim the White House.

One piece of that puzzle involved getting religion back on their side. Their salvation came from an unlikely source, a Congregationalist minister from a wealthy area of Southern California. His name was Reverend James W. Fifield, Jr. Fifield and others, including hotel magnate Conrad Hilton, pushed back against the Social Gospel with their own interpretation. Fifield, Hilton and others rallied under the new banner of Christian libertarianism.

The book traces the rise of Christian libertarianism as a critique from the right against the New Deal and the tyranny of the state. Kruse explores the origin behind the Presidential send-off, “God bless America,” and how “In God We Trust” came to be etched upon our currency. He follows the Eisenhower Administration's efforts to add “under God” to the “Pledge of Allegiance” and other manifestations of ceremonial deism.

One Nation Under God sheds light on the shadowy history of political conservatism, big business, and populist fervor. While Ike's brand of ceremonial deism ruffled few feathers on the national level, things became more complicated on the state and local level. Ceremonial deism worked because it presented a bland, toothless, and inoffensive version of religion. President Eisenhower embodied the perfect definition of “spiritual but not religious.” His baptism into a specific Christian denomination only occurred after his inauguration. And unlike his clerical champions, he performed acts of ceremonial deism but didn't commit to dismantling the New Deal.

In the Sixties, something as benevolent and innocuous as the Gideons handing out Bibles to schoolchildren caused confessional discord. Difference is key. What is the difference between the state recognizing the nation's religious heritage and compelling students to recite a prayer the state wrote?

The narrative concludes with President Nixon using religion for divisive, partisan ends. While presidents attended the numerous houses of worship in Washington, D.C. for private worship, Nixon took the drastic step of orchestrating worship services in the White House. With hand-picked attendees and officiants selected from pro-Nixon congregations, the entire operation appeared both unseemly and grotesque. Apart from the obvious church and state separation issues, the Nixon White House wrapped it up in a veil of sanctimonious doublespeak. Nixon alleged these were private worship services, but in actuality they had the calculated grandeur of courtiers groveling before an absolute monarch.

Kruse illustrates another piece of the puzzle of Nixon's power-crazed White House. The worship services in the White House, taken in concert with things like the Watergate break-in, the enemies lists, and the wire-tapping, create the impression of an office vested with infinite power, no accountability, and the imprimatur of a conservative Christian majority. Nixon, like God, could do no wrong. Despite the public piety, the Nixon White House knew how to play the game.

Chuck Colson said, “One of my jobs in the White House was to romance religious leaders. We would bring them into the White House and they would be dazzled by the aura of the Oval Office, and I found them to be about the most pliable of any of the special interest groups that we worked with.” Words of warning for any religious powerbroker seeking to charm any future presidential candidate.

The main narrative thrust focuses on the big business reaction to the New Deal and follows through until the Nixon White House. Along the way, Kruse offers informative digressions into various aspects of piety and patriotism. The latest batch of anti-gay legislation, wrapped up in the doublespeak of “religious freedom,” involves voters, legislators, and extremist preachers falling for this false origin story of the United States is a “Christian Nation.” But it is fitting that the wealthy business class originated this myth.

As Napoleon said, “I do not see in religion the mystery of the incarnation so much as the mystery of the social order. It introduces into the thought of heaven an idea of equalization, which saves the rich from being massacred by the poor.”