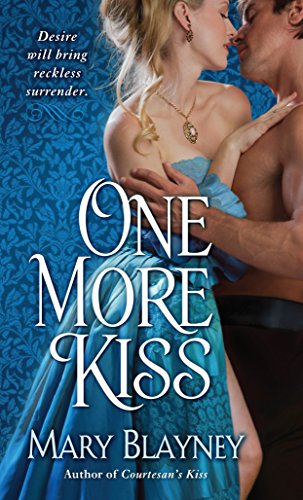 “Was everyone’s life one thing to society and, at its heart, something else entirely?”

Beatrice Brent’s distracted thought proves prophetic in Mary Blayney’s One More Kiss as one by one, nearly every character in this Regency novel is revealed to be more than their first impression would suggest.

Beatrice and Cecilia Brent are, on the surface, wealthy trader’s daughters who are planning to use a house party in the country as their foot in the door of society. Indeed, that scheme has some small merit: while Beatrice is charming and witty and her twin sister is a rare beauty, those traits and their father’s money might not be enough to ingratiate them with the town.

Through their engaging dialogue and sharp observations of their fellow houseguests, they are soon revealed to possess more complexity than their surface appearances. Beatrice has no intention of ruining her sister’s successful introduction to society, but fully intends on remaining her father’s companion if that’s the price of following her dream of studying art. Cecilia, for her part, is disgusted by fawning adoration and expectation that beauty will be her ticket into society. Instead, she teaches their new friends all about horticulture.

They meet their respective matches in Lord Jessup Penniston and Marquis William Destry. Penniston is an acknowledged rake, habitué of gaming hells, and mysteriously complicit in a scandalous divorce.

Is it a surprise that most of his faults constitute a smoke screen meant to shelter his kind heart from the society that jumped to condemn him without learning the truth? Destry is a doughty gamecock of a man, leaping impulsively from one activity to another; Cecilia is shocked by him . . . until she becomes aware of how cruelly he’s been mistreated by his family.

In Beatrice and Jess, and to a lesser extent Cecilia and Destry, she’s created well-rounded, likeable characters. They act believably and generally in character for the period. It’s a gift to see her flesh out most of her characters (though Chadwick, the villain, ends as unidimensionally evil as he begins—it works for him), creating layered personalities and storylines for each.

Ms. Blayley shows different facets of each character gradually, much as various bits of a real personality are revealed slowly, which gives her novel a different feel than many Regencies.

Also refreshing is Ms. Blayley’s attention to period detail. She keeps her fashion, entertainment, and even food choices spot on without going into tedious detail. There are very few verbal anachronisms (particularly an overuse of contractions), presumably in the service of engaging a modern reader, but they are scant enough not to detract from the story.

One More Kiss sets itself squarely in Pride and Prejudice territory, both in sentiment and conclusion, with Beatrice and Cecilia playing the parts of Elizabeth and Jane Bennett.

The book is light in tone and surprisingly literate in execution. One section has the characters delving into the nature and societal underpinnings of Mary Shelley’s Frankenstein in a manner worthy of literary fiction rather than a mass market romance; another passage skews off into a discussion on the genius of Rembrandt’s sketches. Dialogue is more witty than suggestive, characters more chaste than reckless.

In fact, a caveat to the reader: Don’t let the bodice ripper cover and book jacket tease fool you; this novel is written as a straight-up Regency historical, heavy on the Regency detail and sweet romance and light on erotica. There is one sex scene that is not particularly poorly written, but is jarring nonetheless because it in no way fits the tone of the rest of the book. The only other stumbling points in One More Kiss are the few aggressive physical observations, again, because they feel forced.

One More Kiss is a delightful combination of social comedy, slight mystery, and sweet romance. It’s a thoroughly charming novel, well worth a read for those more interested in relationships than smut.