One Mighty and Irresistible Tide: The Epic Struggle Over American Immigration, 1924–1965 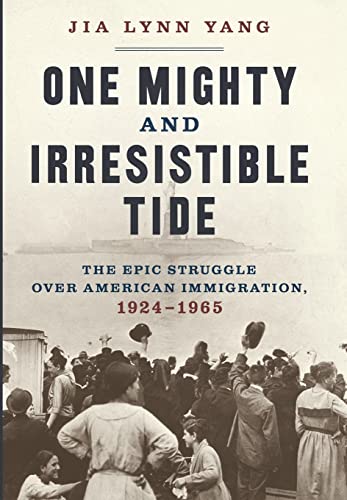 “it would be well for all to read One Mighty and Irresistible Tide in order to gain a better understanding of what it means to be an immigrant pursuing the American Dream.”

With the ongoing debate raging in our society over illegal immigration, One Mighty and Irresistible Tide is a timely contribution to the discussion. In effect, this book could be considered a prequel and starting point for said debate as it provides a history and prior basis for what has been effectively an ongoing argument for well over 125 years as to who is worthy of admittance to our country and inclusion in what is rapidly becoming a true and absolute melting pot and a multicultural and multipluralist society today.

The significance of the year 1924 is twofold. After the Bolshevik Revolution during World War I and the so-called postwar “red scare” there was a fear of permitting such potential revolutionaries to infiltrate the country via immigration and being overrun by the poverty stricken dregs of war torn societies who might become “public charges” in America. It was also the year of a Congressional law that instituted national origins as the desired basis for future immigrants. In effect, it was based on race.

What followed was 40 years of struggle to overturn this law and provide for a more equitable distribution of those seeking to emigrate and regional or continental quotas that would permit all those deemed eligible to come to this country, hopefully assimilate, contribute to our national progress, and realize the dream and hope of Emma Lazarus' iconic poem that accompanies the Statue of Liberty in New York Harbor.

Needless to say, those on both sides saw themselves as standing up for what they believed was the vision of the founders in maintaining the stock of mostly northern and western white European peoples or being universal in giving everyone deserving a chance at the American Dream. Indeed, the author's family was one of those given that opportunity when Mao and his Communist Party took over China in 1949.

The cast of characters in this fight is extensive. For those somewhat younger, they probably won't mean a thing, yet for the older reader, there will be many familiar names of politicians, academics, and others that will make the story seem like a trip down memory lane, including one Congressman who was a young representative at the time the law was passed and was still fighting to change it 40 years later when that national origins law was replaced by the Immigration and Nationality Act of 1965.

In any event, the struggle was long and tortuous. It included virtually all human population groups, races, religions and ethnicities (Asian, Latino, etc.) lobbying Congress to do the right thing and realize the dream of a true American melting pot, while those who argued against changing the law did so for a variety of reasons, most of which were intrinsically or inherently white supremacy based—even if they were not always willing to outright admit to such.

The format of the book literally follows that long and tortuous path in recounting the story, touching on all of those politicians and others mentioned above and all of the events over 40 years that had a bearing on overhauling a law that had largely shut the door on immigration for decades and instituted quotas that had no relevant bearing, basis in reality, or were absolutely discriminatory. Just like then, something needs to be done now, if for no other reason than to, preferably, eliminate the debate.

As author Yang is not a historian but a New York Times deputy national security editor, the endnotes are the type that reference a quote or expression on a specific page in the text. She has, however, done extensive research in archives, presidential libraries, newspapers, government documents, and other relevant sources that demonstrate a decided grasp of her subject, notwithstanding her own personal family immigration tale.

If there is any criticism to be made, it is that there are no photographs of any of those personages (Harry Truman, JFK, LBJ, etc.) or locations that are so important as context to providing points of reference. That would seem to be a bit of a mystery.

Nonetheless, this is an interesting as well as important narrative of a subject relevant to our society today. As such, it would be well for all to read One Mighty and Irresistible Tide in order to gain a better understanding of what it means to be an immigrant pursuing the American Dream.