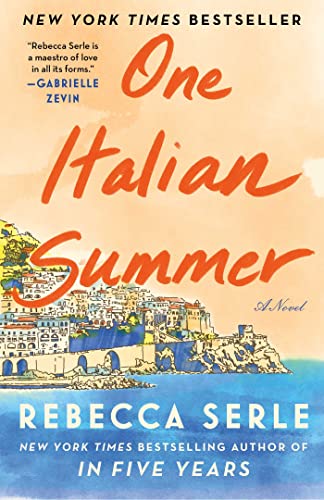 “One Italian Summer tells a story of grand proportions in which love transcends all things. It chronicles the unfathomable bond between mother and daughter that cannot be severed, not by time and not by death.”

What’s not to love about spending a summer vacation on Italy’s Amalfi Coast? Nothing and everything. When the trip was supposed to be for a mother and daughter, but the mother dies one week before departure, is there any reason left to go? Is there enough reason to stay? These are the questions that plague Katy Silver in Rebecca Serle’s One Italian Summer. Not knowing the answers, Katy embarks on and experiences a summer like no other in which she truly comes to know the woman she loved more than life.

Katy is in distress. Her life is falling apart, her marriage is in in peril, her job is in question—all because her mother has died. Unable to “conceive of a world without her” and wondering “who I am in her absence,” Katy stands on a precipice, teetering on the edge, without a railing to protect her. She’s lost, but worse, she’s alone. At least, she feels she is.

From the moment Katy steps onto the Italian coast in Positano, she is entranced. The town is all that her mother promised it would be—except her mother isn’t there. Determined to make the best of things, Katy sets out to enjoy her time. She will not think about her husband, her job, her future. All she wants to think about is her mother and how to go on without her, but something about this town, this hotel, the people she meets make her wonder: What was her mother like the last time she was here, 30 years ago? And just like that, the question is answered.

When Katy first sees the woman standing at the desk in the hotel lobby, she is unable to breathe. She only sees her from the back, but she knows. She can sense it. She would know the woman anywhere—her figure, her voice, her style. Carol Silver is in Positano, young, vibrant, alive. For the second time in two weeks, Katy’s life changes in an instant.

One Italian Summer poses the impossible—what if you had your deceased loved one back, in the prime of her life, and you could get to know her in a way you never knew her before? As Katy and Carol grow closer in an immediate and easy friendship, Katy begins to see her mother in a different light. Disorganized rather than systematic, spontaneous rather than methodical, and carefree rather than responsible, Carol is not at all the woman Katy knew throughout her life. Troubled by these realizations, Katy begins to question everything she knew about her mother, throwing her own life into a deeper state of turmoil.

With a cast of endearing characters, One Italian Summer takes Katy and the reader on a magical journey. Brother and sister hoteliers, Marco and Nika, are at the same time parental and companionable, and Katy relies on both as advisors as well as confidants. Adam Westbrooke, an American developer, provides a distraction from Katy’s failing marriage and a temptation she can’t seem to resist. None of these allies, however, fill the void in Katy’s life quite the way her new best friend, Carol, does.

A shocking twist leads Katy to several cataclysmic discoveries. Knowing this new truth about her mother, combined with all the revelations their friendship has brought to light, forever changes the way Katy sees her mother and herself. Will she be able to accept that her mother was a normal, flawed individual? Will Katy experience a breakthrough that will propel her forward or a complication that will negatively impact the rest of her life?

Mothers and daughters, whether they are the best of friends or suffer from a difficult relationship, will all see themselves in Katy and Carol. It’s not easy to realize that one’s mother has flaws and makes mistakes. It’s even more difficult to face one’s own shortcomings. Sometimes it takes a cosmic shift to open one’s eyes to the things that have been before them all along.

One Italian Summer tells a story of grand proportions in which love transcends all things. It chronicles the unfathomable bond between mother and daughter that cannot be severed, not by time and not by death.