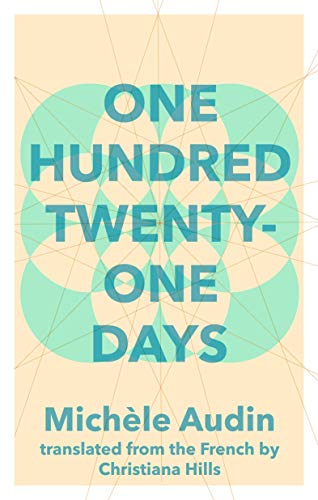 Michèle Audin's debut novel One Hundred Twenty-One Days is a story about mathematics and love. Audin also happens to be a mathematician and a member of the prestigious Oulipo literary group. Oulipo members construct experimental literary pieces with severe strictures on their production. Like mathematics, Oulipo seeks to create elegant beauty from challenging proofs. Throughout the novel, there is a clash, sometimes explicit, sometimes implicit, between the icy objectivity of mathematical theory and the messy chaos of everyday life.

War, politics, racism, anti-Semitism, collaboration, and patriotism play their respective roles in a novel that spans decades and generations. While the narrative remains constant, Audin abruptly switches genres and tones.

The novel begins as a fairy tale, complete with “Once upon a time, in a remote region of a faraway land, there lived a little boy.” The boy becomes a mathematical prodigy, attends university, and suffers a grievous wound in the First World War. He recuperates in a hospital, works on his mathematical proofs, and falls in love with a nurse.

The different genres and narrative techniques enforce new perspectives with each successive chapter. The fairy tale, the most traditional of story forms, gives way to a diary, newspaper articles, and so on.

Further into the text, the story becomes nothing more than an inventory of a historical archive. One of the final chapters, “The Numbers” is a list of numbers used in the novel and their significance.  “1    single bullet managed to remove one of M.'s eyes, his nose, and half of his jaw.” Then there is this number, “67   kilometers, the length of what became known as the Auschwitz death march.” The short chapter, only a few pages, is simultaneously a bloodless numerical inventory and a recapitulation of the novel's significant events.

The 120 Days of Sodom, the notorious unfinished novel by The Marquis de Sade, ends in a simple math problem. It reduced all the atrocities, carnage, and outrage into a formal exercise a student would do for homework. Audin performs the same operation, constantly reducing and distilling narrative until nothing remains but pure numbers.  Although, since 20th century history and personal love is involved, the numbers are anything but pure.

The novel works on different levels and in different registers. A storyline emerges, recounting the lives and misadventures of a group of French and German mathematicians between the world wars.

The story emerges both sequentially, chapter upon successive chapter, but also in the footnotes and marginalia. This is a novel that can be engaged in a linear or a rhizomatic fashion.

What is storytelling, if not a futile grasp to interpret the accumulated detritus, ephemera, the junk of civilization? Although the actual premise of the novel is far from grim: The number (121) is significant, and the reward is discovering that significance.