One Foot in the Black 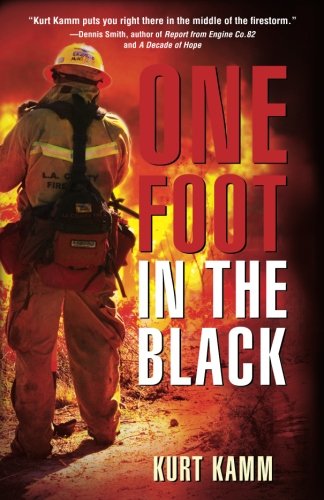 One Foot in the Black: A position on the fireline next to an area already burned (the black). It is at once the most dangerous place—right at the edge of the flames—but also a safe zone for immediate escape.

That explanation regarding the novel’s title sets the tone for this exciting and emotional read. Kurt Kamm writes this fictional story one would swear is an actual account of a firefighter’s life. His characters seem real. So do the situations Mr. Kamm describes, as heroic men and women are drawn like moths to a light with spectacular wildfires.

Greg Kowalski, born and raised in Saginaw, Michigan, has lived in fear of his abusive firefighter father for too long. The boy has witnessed his father’s drunken episodes and his physical and emotional abuse of Greg’s mother and sister.

Despite Greg’s being a good student and exceptional athlete, his father barely acknowledges his son’s existence, seeming to revel in the discomfort and anger he constantly creates for Greg. Unfortunately, this family paradigm is a template for the young man’s future, setting the tone for how he relates to others. Sad.

Fear, rage, and depression permeate the Kowalski household. Love is a precious commodity rarely on display in this family. Consequently, Greg leaves home and heads out west at age 18 for a career as a helitack wildland firefighter. With no support from his family, Greg strikes out on his own into the dangerous world of raging wild fires that consume thousands of acres, destroying nature and lives, and creating a hell on earth for everything in their path.

As we watch this young man come of age, we witness his reaction to life-changing events that would destroy the average person. Ironically, Greg’s mistreatment by his father gives him the strength to overcome these immense hurdles.

Mr. Kamm fashions a solid coming of age tale, expertly weaving Greg’s metamorphosis from youngster to experienced firefighter through encounters with spectacular destructive wild fires. Mr. Kamm also describes the training involved and the discipline required to cope with the rigors of such a profession.

Actively involved in fighting wildfires himself, and having access to both Los Angeles County and City firefighters, Mr. Kamm creates a realism that keeps readers constantly on the edge. It’s a gritty tale told with honesty and compassion.

One Foot in the Black is a well-deserved tribute to a group of men and women who, without any hesitation, plunge deep into the belly of the beast. Well done.