As One Fire Consumes Another 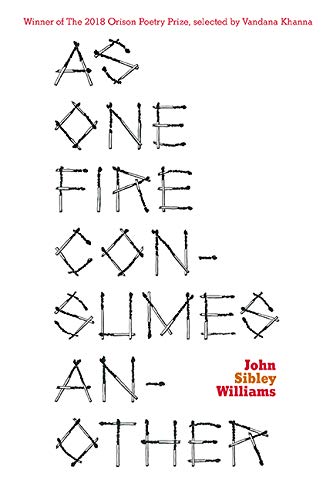 “The great strength of Williams’ collection and of his vision is, in the end, its capaciousness, his ability to speak contradictory truths, to remind us that the same fire that burns also shines within us.”

John Sibley Williams’ new book As One Fire Consumes Another is a revelation wound in tight forms that force language toward incandescence. “For a good price, this/ house & everything in it possibly/ still on fire.” The house of Williams’ poetry is indeed on fire—fire as metaphor for the immolation of the self, the immolation of a country, even the world. The title reminding us that, “as one fire consumes another,” the conflagration will only get bigger and bigger until it’s impossible to put out:

“Once upon a time there was a story

not about desire or grief or wisdom.

to gently lesson us toward rightness . . .

the earth beneath us. Those flashes

or fireflies. Close your eyes, please.

Sleep. Much of the burnt field will

still be here when you wake.”

In the poem “We Are Already at War,” we see that the war is all around us. It goes on with or without us. It goes on within us, but, “We are never really at peace/ long enough to suffer it.” That is Williams’ gift. Though these poems touch on war, torture, terrorism, lynchings, school shootings, racism—in short, the brutish nastiness that often makes up existence—his searching lyricism is also, always offering ways to endure: “Try on all/ sorts of silences until you find one/ that fits. Anything to hush the/ voices . Then never take it off.”

From the beginning, we are, each of us, implicated in the burning. In the poem “Down by the Old Lynching Tree, a Flickering Light,” we find a boy dreaming of lighting a bomb:

often dreams of living into his teens,

is mapping his road to the sky in

metal shards held together by

powder & fuse. A fuse he cannot

light without help. A fuse he cannot

light without fire. A fire that con-

sumes the blindness. From the tired

skin of night a rope snaps free from

Don’t get me wrong. Williams doesn’t always try to have it both ways. There is anger here, outrage that pushes each poem onto the pyre:

lodged in the skull of night, this

fat between us. Thank you, mother;

goddamn the rest. Let’s call a body a

Time and again, Williams gives vent to his rage at the forces that stoked the fires of a world gone out of control. Over and over we witness a phantasmagoria of the endless madness human beings create. In this way, the strength of the book is also its weakness. Those readers who want variety of form or content won’t find it here. Williams’ surrealist vision shakes his poems free from the moorings of the commonplace, transcending the seeming monotony of form and content.

By the end of the book, Williams’ poems also transcend their violence and anger, tendering hope and the potential for love to overcome the fires, as in “The Invention of Childhood”: “she was two/ & the world was golden & nothing I/ said would stop her from asking the questions I’d forgotten had answers,” or in this moment from “Northernmost November”:

love. At least an honest attempt at

loving what remains. Next time I

point my finger at the sky, say all the

stars will shatter and rain down their

light. Say that light is already in us.”

To echo Eliot, our propensity for love and our propensity for violence intertwine in “the crowned knot of fire.” The great strength of Williams’ collection and of his vision is, in the end, its capaciousness, his ability to speak contradictory truths, to remind us that the same fire that burns also shines within us.