One Day and One Amazing Morning on Orange Street 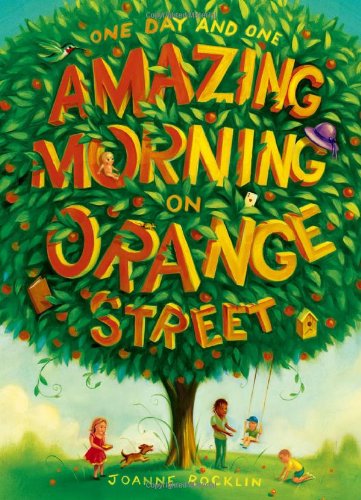 While this engaging middle-grade novel is set in contemporary suburban Los Angeles, it takes readers back to the days when kids actually played outdoors in their neighborhoods from morning to dusk, when they built forts, buried childish treasures, started clubs, and formed enduring friendships.

The story centers around an old Valencia orange tree living on an empty lot on Orange Street. In one marvelous chapter the tree tells us its own history. A cast of endearing characters complete with assorted quirks populates the street and the story. There’s Ali, Edgar, Manny, Bunny, Leandra, and Robert.

Ali, the dreamer, is trying to cope with her little brother Edgar’s devastating illness. Manny is his sitter/nanny, older than the other kids, but hanging out with them while he’s taking care of Edgar. Bunny obsesses over her mother’s safety, protecting her with a dozen compulsive rituals. Leandra worries about the new baby that’s coming soon, an event that she wishes her parents had consulted her about first. Robert’s best friend just moved away to New Zealand, and he’s trying to win over new friends by showing them magic tricks. And then there’s Mrs. Finneymaker (called Mrs. Snoops by the children) who’s prone to dialing 911 whenever she fears something is not quite right.

One morning, a morning that seems ordinary “until you look back on it,” an orange cone appears on the sidewalk in front of the orange tree. Mrs. Snoops sees it first and immediately phones 911 to report an impending murder. Leandra says the cone means bad luck. Ali believes it means that an important person will be driving by later on. Or maybe it just means no parking. They call for an emergency meeting of the “Girls With Long Hair Club” to talk about it.

A mysterious man shows up, sitting in his car on the street, eating a burger, and writing on a tablet. Mrs. Snoops, who just happens to keep her binoculars handy at all times, sees everything. Somehow the man looks familiar. He might have once lived on Orange Street, but she can’t remember his name. She forgets a lot more these days than she used to. And her daily magic chant isn’t helping her memory very much.

Ali, a budding archeologist, often digs for treasure at the foot of the orange tree. That afternoon, the stranger wanders over to see what she’s found. She shows him some of her treasures: an old cookie tin with a doll’s head inside, assorted nails and jar tops, and her favorite, a blue stone shaped like a heart. Ali notices tears in the man’s eyes as he leaves the children and drives away.

The next morning, the mystery of the orange cone becomes all too clear when Sid the tree man drives up in a big truck and prepares to excavate the tree. The children are shocked and dismayed. Mrs. Snoops calls 911. The real owner of the lot—the mystery man from the day before—wants the tree removed so he can build a new house and return to the place where he lived as a child. As Sid explains what he’s going to do, Ali yells, “You’ll have to debranch the tree with all of us on it!” The kids climb into the tree and defiantly straddle the branches.

The ending of One Day and One Amazing Morning on Orange Street is satisfying, but not unexpected, and the tree’s fate is perhaps too readily resolved.

This heart-warming story takes place over a day and a half, moving back and forth in time, weaving together the strands of past and present to connect the stranger, the children, and Mrs. Snoops to the tree and to each other in surprising ways. This deceptively simple book reminds us how important the things we sometimes take for granted are: friendship, family, love, and the interconnectedness of our everyday world.