One Click: Jeff Bezos and the Rise of Amazon.com 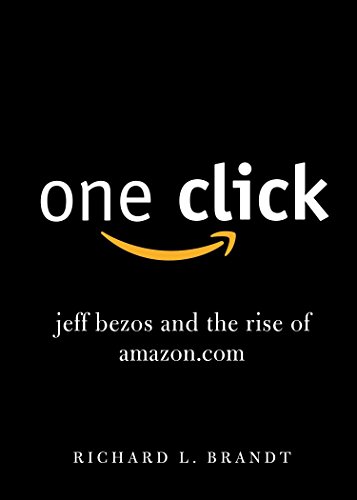 “. . . a keen intellect, a drive to succeed, and an innate stubbornness to the point of absurdity help. These are all signs of a born entrepreneur. . . . Mr. Bezos’ ability to think strategically while acting tactically may be his greatest genius. I still would have enjoyed reading about it all in more detail.”

Have you ever gone to a dinner party anticipating an exquisitely satisfying meal only to find the hosts are just serving appetizers? Now these appetizers may be truly fine, but they are still just appetizers. That, in a nutshell, is Richard L. Brandt’s latest book: One Click: Jeff Bezos and the Rise of Amazon.com.

Mr. Brandt is a well-respected freelance journalist who has written three previous books, including two on Google. His style is easy to read and flows quite nicely.

Yet after reading this book profiling a pioneer of online commerce and the giant Amazon has become, one might be just a little disappointed with One Click. (Still hungry after the appetizers?) The book is listed at 224 pages; however, it measures only 5 by 7 inches where the typical business book is closer to 6 by 9 inches. The result is pages that are 54 percent smaller. This is like reading a 103-page standard-sized book.

Why is this important? Because if the author had written 224 pages of a more standard size he might have been able to delve into his chosen topic with more depth. Too often here the author serves up interesting and important information, but leaves the reader wanting more. A more expanded helping of text would have left the reader more satisfied—and perhaps more willing to pass on dessert rather than needing it to feel satisfied.

To be fair, One Click is good in the sense that the author covers a wide range of subjects, so the reader receives a balanced—if rather paltry—exposure to Mr. Bezos’ positives and negatives; his successes and failures; his good side, as perceived by his employees, and his bad.

Here is a little insight into Mr. Brandt’s interpretation of Mr. Bezos: “. . . he has the self-confidence of Muhammad Ali, the enthusiasm of John Kennedy, and the brains of Thomas Edison.” Further states Mr. Brandt, “Of course, a keen intellect, a drive to succeed, and an innate stubbornness to the point of absurdity help. These are all signs of a born entrepreneur.”

Whether all born entrepreneurs possess these traits or not is debatable. Yet it is the combination of these qualities that is proffered as the catalyst for Mr. Bezos’ success with Amazon.

The financial and technical (computer) training Mr. Bezos sought and received early in his career shaped his vision of “(a) . . . great online experience with very little human interaction with customers.” He saw—before most in the Internet space—that an online platform could be leveraged into something not achievable on the ground in a strictly “bricks and mortar” business.

Success is one of those words so often thrown around that it is nearly meaningless without qualifiers. Is Amazon a commercial success? Absolutely. Based on size, volume, revenues, profits, reach, innovation, influence, etc., it certainly is.

But why and how has Amazon succeeded in an arena where so many others have failed?

Mr. Bezos has repeatedly stated, “We know if we can keep our competitors focused on us, while we stay focused on the customer, that ultimately we’ll turn out all right.” This really seems to sum up a lot of his personal philosophy; and the author brings the reader back to it several times with various examples. Amazon is focused on the customer even at its own financial expense, according to Mr. Brandt. And early on, the financial expense was tremendous.

During the dot.com rock ’n’ roll days, when seemingly everyone was starting an Internet company and “profit” was a bad word, Amazon didn’t make any, and Mr. Bezos was quoted in the New York Times in January 1997 as saying, “It would be the easiest thing in the world to be profitable. It would also be the dumbest.” His philosophy was to reinvest to grow. And grow he did. Faster and better than anyone else.

Then during the Internet “crash,” when Amazon’s stock took a tumble, Mr. Bezos’ investors were jumping ship and demanding reforms, he changed the company focus from pure growth to a profit motive in December 1999. The world had changed; and for one of the few times in this firm’s storied history, Amazon followed the market instead of leading it.

Yet “Amazon became the first Internet company to completely redefine an industry,” Mr. Brandt writes. The bookstore was no longer the building on the corner. It was on everyone’s computer. Further, “Amazon wasn’t just a selling site; it became an early social network site for book fans.” Arguably, Amazon has become to books what Starbucks has become to coffee.

Mr. Bezos emphasized to his staff: ”We’ve always said we would expand into areas where we can leverage the three things that business can often leverage: our brand name, our skill sets, and our customer base.” Mr. Brandt adds, “From the beginning of his company to the present day, Bezos has been fanatical about squeezing out every incremental percentage point of usefulness in Amazon.com.”

It is clear from everything that Jeff Bezos leads through his mantra of “. . . think of the future, not the present.” A telling example is another quote from the book: “The CEO of the largest bookstore on earth believes that books have had a ‘great five hundred year run.’ But now, he insists, ‘it’s time to change.’” The change? The Kindle.

eBooks have been around but never really made a dent in the prevalence of “dead tree” versions, and multiple players in the market were unsuccessful at changing this. After four years of tinkering, Amazon combined the most user-friendly elements of eReader technology with access to massive amounts of content with the Kindle. Think iPod (not the first mp3 player) and Apple. Once again, Amazon successfully shook up the market.

From Amazon, the company to Jeff Bezos, the man, “What got him ahead was his ability to take in the big picture as well as deal with the most demanding details,” Mr. Brandt writes.

Mr. Bezos’ ability to think strategically while acting tactically may be his greatest genius. I still would have enjoyed reading about it all in more detail.