Once Again: A Novel 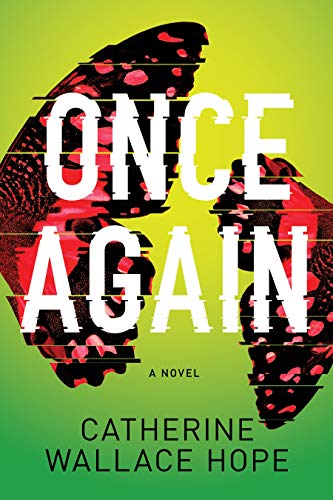 “Thanks to its fascinating premise and to the strength of chapters told from her point of view, the book succeeds by constantly keeping the main character off balance as the moments from the past and present spring up in nonlinear ways.”

When you think about the worst thing that’s ever happened to you, do you wonder what would it would be like to travel back in time and find a way to stop it from occurring? Thanks to the mysteries of an astrophysics experiment underway by her husband, that possibility might be a reality for Erin Fullarton, still grieving mightily after the murder of her young daughter, Korrie, 500 days ago.

Erin, who’s captured with perfect depth by Catherine Wallace Hope in Once Again, is commemorating that dreadful day at the beginning of this novel with a series of mental processes designed to deal with her grief. None seem to work as heartbreaking memories keep her mired in a state of depressive inertia. Regardless of what her therapist recommends, there doesn’t seem to be any way to “move on” from the tragedy.

A strange phone call then raises the intriguingly surreal possibility that she won’t have to. It’s from an administrator at Korrie’s school, who informs her that her daughter’s running a temperature and needs to be picked up. It’s a cruelly obvious prank, Erin, assumes, even as she recalls that her daughter indeed went to school feeling ill on the day she died. She then looks out the window to see her summertime yard snowbound just as it was on that terrible day and realizes she has indeed slipped back in time and now might have a chance to stop the murder.

Thus begins a series of jumps in time from the past to the present and back again, juxtaposed with details of the experiment by Erin’s husband, Zac. In what he hopes is a scientific and career breakthrough, he’s zeroing in on a cosmological phenomenon connected to black holes in a way that causes time to skip back and forth, which is how Erin has gained the chance to undo what has happened.

Readers who aren’t too scientifically minded could be confounded by the descriptions of that experiment because although Hope has obviously done her research, it isn’t particularly easy to understand how Zak’s experiment actually works. Nevertheless, there are enough details to provide a sense of credibility to the mystical things that happen to Erin as she fights to bring Korrie back.

Thanks to its fascinating premise and to the strength of chapters told from her point of view, the book succeeds by constantly keeping the main character off balance as the moments from the past and present spring up in nonlinear ways. Unable to contact her husband or come up with an explanation of what’s happening that would sound plausible to law enforcement, she flings herself into a vortex of uncertainty driven by desperate hope.

From there she’s forced—and compelled—to go back to the hours around Korrie’s disappearance and to experience many of the things that happened firsthand. Meanwhile chapters told from the perspective of a detective and of the killer, who’s rendered with horrifying details, deepen the sense of reality that makes the metaphysical aspects believable.

As a result, Hope skillfully weaves aspects of the investigation into the search and attempted rescue of her daughter and extends the idea of second chances to the detective as well. Although the story’s premise about having an opportunity to undo the past is exciting enough to draw readers in, the brisk and thrilling final chapters demonstrate the best and worst things that can happen if you take that chance.