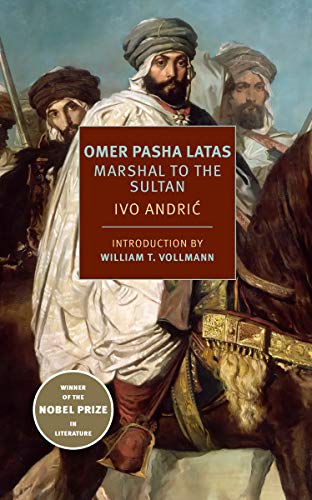 “this book is a welcome addition to Andrić’s works where the Balkans are revealed in measured prose and where Andrić’s post-modern narrative will elicit many well-deserved accolades.”

The New York Review of Books’ publication of Omer Pasha Latas: Marshal to the Sultan by Nobel-prize winning author Ivo Andrić makes available to English an often neglected work. The new translation from Serbo-Croatian by Celia Hawkesworth, who has also translated Andrić’s more popular novel The Bridge on the Drina, opens another gateway into Andrić’s writing and to the frequently closed-off lands of the Balkans, a geography that has needed additional opening up to English readers since Rebecca West cracked the door with her two volume travelogue Black Lamb and Grey Falcon in 1941.

Set in 1850 in Bosnia, the novel begins with Omer Pasha Lakas’s arrival in Sarajevo where his goal, on behalf of the Turkish sultan, is to “wage war and punish” any inhabitants who resist the imposing Turkish rule. Given “unlimited authority” to do whatever is necessary to accomplish his task, Omer and his army take up residence in Sarajevo and the countryside and begin the job of forcing submission, which takes a year and is the book’s ostensible time structure. Here is the plot, here is the setting.

The novel, however, is less about Omer but more about the world Omer inhabits and his influence upon it. The Ottoman Empire’s minister of war, or seraskier as he is called throughout the work, is revealed through the disruptions, reactions, conceptions, and submissions he forces from those he holds power over. He is “like an octopus, whose tentacles, invisibly connected, lived each for itself.”

As the book opens, the narrative focuses on the armies Omer brings with him and the disruption affecting the local inhabitants whose food and animals are requisitioned to feed the army, and the soldiers whose excessive drinking drives them into debauchery and even rape.

Another section reveals those affected by Omer’s philandering whose wild sexual appetite is related by Ahmet Aga, “the man in charge of the pasha’s coffee,” but who also “procures young women, girls, and in recent years, children, both girls and boys” for the pasha. Through Ahmet, one clear facet of Omer is revealed: “his lust.”

This understanding of Omer’s carnal desire, however, is directly opposed to the domestic version of Omer which his wife, Saida Hanama, paints in the section devoted to her story. Here, Saida relates Omer as “like a moment of rest and security, . . . a piece of firm, relatively peaceful ground under her feet.” Both stories carry the weight of Omer’s power in them: Ahmet must secure Omer’s secrecy at all costs and works tirelessly to pay off and suppress women who reject their role in the harem, and Saida must submit to Omer’s power with her identity subsumed to his.

These stories within stories contain several marvels that highlight Andrić’s ability at narrative. The painter of Omer’s portrait plunges into the struggles of a middling artist whose misinterpretation of the pasha’s wife’s affection leads to palpable tension. An especially engaging tale involves a member of the pasha’s household who becomes infatuated with a young girl; the girl, however, refuses to reciprocate this love, and the episode escalates into a thrilling chase through Sarajevo until the spurned lover murders his love before taking his own life.

Similar to The Bridge on the Drina, the central subject—Omer Pasha, in this case—serves as an object which the narratives oscillates around, and through those stories, a portrait emerges. Thus, Andrić’s title makes an ironic allusion to biography, for it is not a biography. Indeed, by the novel’s conclusion very little is revealed about Omer Pasha.

Instead, what Andrić gives in Omer Pasha Latas is a portrait of Bosnia under Turkish rule in 1850. It is a land unsettled by power where religion divides and nationhood splinters. The pasha presses his authority into uncomfortable relationships with Christians and Muslims and those who independently cling to Croatian, Serbian, and Bosnian allegiances.

Unfinished at his death in 1968, Omer Pasha Latas feels whole here, for Andrić brings us closer to capturing something of the historical Bosnian past. Ultimately, this book is a welcome addition to Andrić’s works where the Balkans are revealed in measured prose and where Andrić’s post-modern narrative will elicit many well-deserved accolades.