The Odyssey of Geronimo: Twenty-Three Years a Prisoner of War, A Novel 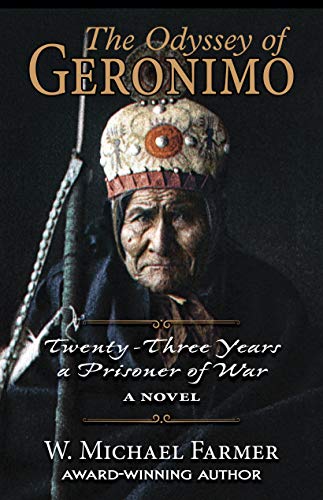 “an image of a proud man who gave in to the wishes of his people to reunite them with their families and suffered the ignominy of becoming a prisoner in his own land . . .”

From 1850–1886, Geronimo (or Goyaalé, his Apache name) and three other Apache Chiricahaua bands fought the US and Mexican armies in northern Mexico, Arizona, and New Mexico. Contrary to popular belief, he wasn’t a chief of the Apache but was a shaman or counselor, and their war leader.

“in our council we talked of surrender and going to our people in the place the White Eyes called Florida. As the warriors talked, I saw those that had their families with us wanted to continue the fight, but those with families in Florida wanted to quit and be near their families. They wanted to surrender, regardless of the cost.”

From this point on, Geronimo may have been a prisoner of war, but it was a profitable condition. For the US, it proved the superiority American might over an enemy; for Geronimo, it was a way to make money. He appeared at various events, expositions, and fairs, and, beginning with the sale of a button from his shirt to a white bystander, he profited from the further sale of souvenirs—handmade bows and arrows, and spears.

He also laughed at the trick he often played on his eager customers:

“I sold many things we made to the iron wagon riders. So many White Eyes bought my toy bows and arrows that other Chiricahuas who had made them gave them to me to sell, and I did. I didn’t tell the White Eyes I never made some of the bows. They knew I sold them, and thus believed I’d made them. In half a moon, I had sold everything.”

During his captivity, Geronimo encouraged his children to go to the Carlisle Indian Industrial School, where several studied animal husbandry and agriculture.

Most of Geronimo’s family, especially the children sent away to school,  would eventually die of tuberculosis after returning home, though there may be no correlation between those two facts. The old shaman himself, however, having been told he would not die in battle, would eventually succumb to pneumonia at the age of 79.

This fictional autobiography, narrated by Geronimo, gives a more personal and intimate account of the shaman’s life than any entry in an encyclopedia or history book could imagine.

It deals in human terms of a man who would’ve preferred to “go down fighting” but bowed to the wishes of the majority. It tells of his constant fear that the soldiers would one day drag him from him home and kill him, of his love for his three wives and the grief he felt when each died, of forbidding his last daughter living at home to marry because he was afraid she’d die in childbirth.

Through extensive research, award-winning author W. Michael Farmer has created an image of a proud man who gave in to the wishes of his people to reunite them with their families, and suffered the ignominy of becoming a prisoner in his own land, becoming “hated by some of his own people, loved by others, but respected by all.”

Including maps of the places where the prisoners were held on their journey to Florida, there is also a Dramatis Personae of fictional and actual historical characters, a brief lexicon of Apache and Spanish words and phrases, and an explanation of the Apache reckoning of time and seasons.