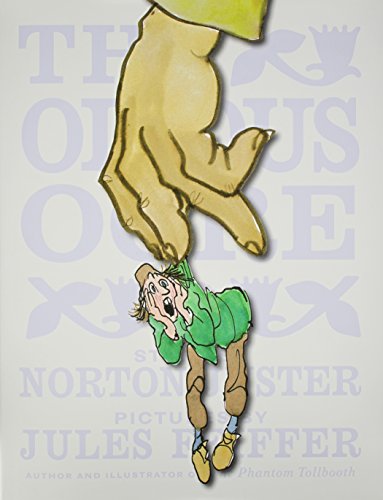 The odious Ogre of the title is reminiscent of the one in William Steig’s original picture book, Shrek—but with his inherent ogre-ness on steroids. And that’s about where the resemblance ends.

While Shrek the book was told in spare prose, reading The Odious Ogre is like sitting at the feet of a favorite, curmudgeonly uncle who just happens to tell captivating stories in a delightfully roundabout way.

Author Norton Juster penned the children’s classic, The Phantom Tollbooth, and Feiffer inked the drawings in that book. Though both of them continued to have separate illustrious careers in children’s literature, it took nearly 50 years for them to get back together again. And it was worth the wait.

Stomping his “enormous” feet and roaring his “unbearable roar,” Ogre does all the things one would expect of an ogre well-versed in ogredom: he eats everyone in sight and frightens townspeople into hiding under the tables rolled up in balls, blindfolded, and with their ears stuffed with “stale cake”—a defensive posture that does not serve them as well as it might with a less fearsome threat.

Then the impossible happens. Ogre meets his match in the form of a polite little girl who is completely unruffled by his appearance, his roar, or his appalling manners. It’s clear that this is the first time Ogre has met anyone who might even like him—even though a makeover is clearly in order. In fact, she decides to give him lots of advice on how he might be better accepted into polite society. Her sweetness elicits all sorts of reactions from Ogre, not the least of which is paranoia, soon followed by big, overblown ogre moans at the unfairness of it all.

A slightly old-fashioned romp, with illustrations that give away just enough but never too much, The Odious Ogre is destined to be a modern classic for lovers of all things ogre—despite themselves.